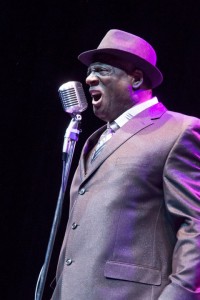 Black Ensemble Theater’s “Ain’t No Crying The Blues: In the Memory of Howlin Wolf,” is as much a memory play as it is a jukebox biography-musical. The subtle difference between a show like “Buddy” and “Ain’t No Crying The Blues” is made through this piece’s reverence for the man as well as its stunning insight into our fears of mortality. Writer Jackie Taylor, in this revised remount directed by Rueben Echoles, has a keen eye for Wolf’s spiritual legacy beyond the singer’s literal accomplishments: the blues man’s hit songs like “I Ain’t Superstitious” and “Red Rooster.”

Of course, the audience bursts with enthusiasm each time Rick Stone mesmerizingly recreates a classic, but the soul-satisfying catharsis comes from sympathetically reanimating a vital Chicago figure, Chester Arthur Burnett, that nowhere near enough people are talking about. As Howlin Wolf emotionally reminds us, all it takes to keep someone alive is quietly saying their name.

Stone, in ritualistic fashion, arches his back, bends his elbows and allows his wrists to fall, transforming into the charismatic Wolf with easeful, focus-grabbing energy. When he’s onstage, it’s a struggle to look at anything else. Stone howls and the audience excitedly howls back—an actor more super than the super moon. Taking us on an abridged tour of his life and times from a childhood in West Point, Mississippi to his adulthood Chicago, Wolf is fully aware that he died in 1976, and the playgoers are privy to a narrated afterlife concert that likely will last an eternity. Howlin Wolf revisits formative moments in his past—leaving his abusive family, instances of youthful arrogance, his proud preaching of fiscal responsibility in a profession not renowned for it, first meeting his beloved wife Lilly—while his artistic and professional nemesis, Muddy Waters, keeps showing up in his story uninvited.

Their fabled animosity was, in truth, an act that boosted the performers’ public personas. But the point is that in life as in death Wolf is ultimately in control of his own narrative. When we die we leave behind our actions, our family, our friends and our art, and we must trust that within that living time capsule exists eternal life. (Johnny Oleksinski)