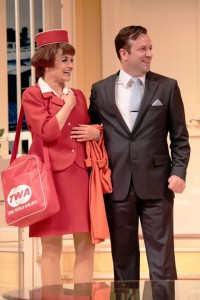 Those plays saw middle-class characters freak out over the ridiculous lives of other middle-class characters. Keeping up with Le Joneses. The sixties also saw the rise of a more content middle class, which looked at itself to define glamor. Visually, of course, women carbon-copied the ensembles of Jacqueline Kennedy Onassis, but socially they found contentment in the otherwise banal, rather than envying the aristocracy through a thick window pane. Backyard barbecues, flavored martinis and exquisitely manicured lawns—the life.

Air travel, like lawn-care, has lost whatever high-society mystique it managed to acquire in its heyday. Nowadays, much airline revenue is work-related, and, come to think of it, business itself has shed its once-enticing exoskeleton. From men-about-town to schlubs-about-couch. By happy coincidence, I am on a flight, and, glancing around the cabin, the prevailing color scheme is clay-gray and the brightest object my little eye can spy is the canary yellow safety brochure. There is no second level and no dreamy Ken doll pilot as in “Catch Me If You Can.” Whatever airplanes and air-people were actually like in the sixties, it doesn’t matter. Farce has little concern for exposing domestic banality; it’s a giddy, fatuous genre that remarks on the common person’s excesses, so often carnal. Television is better suited to living-room panic attacks, which is perhaps why the airline drama “Pan Am” had such a short go on ABC.

Bernard (Stef Tovar), an American architect now living in Paris, has a taste for air hostesses aka stewardesses aka flight attendants. In fact, he is engaged to three of them. But before your mind rushes to the boggling complexities of “Sister Wives,” note that no woman is aware of the other two. He’s gone so far as to choose his triptych of forever-fiancées from separate airlines to ensure no route overlap.

There’s Gloria (Kara Zediker), an American redhead from TWA; Gabriella (Dina DiCostanzo), an Italian brunette from Alitalia; and Gretchen (Katherine Keberlein), a German blonde from Lufthansa. A glance at these actresses’ surnames should assure you that they’ve been properly cast. Though Bernard makes certain, with mathematical precision thanks to the help of a nifty airline timetable book and a live-in maid named Berthe (Nora Dunn), that the ladies’ two-day shifts at his apartment never cross paths, new jets are becoming faster and Mother Nature is unpredictable. When huggable-yet-daft schoolyard pal Robert Lambert (Dan Cantor) stops by from ho-hum Wisconsin for a visit, so too do all three ladies.

Drury Lane Theatre’s production of Beverly Cross and Francis Evans’ translation, directed with appropriate efficiency by Dennis Zacek, lacks certain sexual proclivities that would and should up the ante, but is nonetheless freewheeling with enjoyment and smiles. The three air hostesses are all disarmingly human underneath their stereotypical facades, with Zediker’s weekends-at-Kennebunkport vocal affectation being a particular delight. The production’s strongest selling point, however, is also its weakest link, by far. “Saturday Night Live” alumna Dunn is at a palpable disconnect from the snarky Berthe. She lends the character a sped-up Pixar squeal and a bland, ambivalent physicality. Most jarringly, her comedic timing on opening night was lazy, stepping on laughs if eliciting them at all.

The acting company deftly manipulates the seven doors at their disposal. Zacek has tightly staged the entrances and exits—the impetus of all farcical conflict, really—so that a door opens just as another one closes, almost never for good as the famous aphorism might suggest. When the wrong-colored bag is left on the settee or the revolving photograph isn’t tuned to the right gal, the Drury Lane audience churns with anticipation, but the antics never get people as revved up as they could. Though the spoken sexuality of the script is innocuous, allowing that element to take a backseat to all things sugary is detrimental. The most important tenet to remember in a farce like “Boeing-Boeing” is that sex is everyone’s problem as well as everyone’s solution. (Johnny Oleksinski)