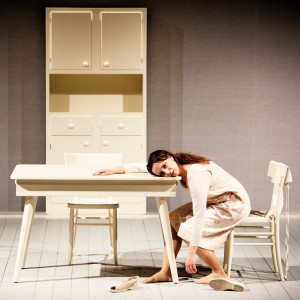 “Who can solve the mystery of dreams?” demands actor/director Toni Servillo as the increasingly disheartened Alberto Saporito in Piccolo Teatro di Milano’s production of the darkly comedic Italian play “Inner Voices, ” written by the prolific Eduardo De Filippo in 1948. At least that’s how the English translation of the fervent Italian dialogue reads, rapidly projected on three glowing screens above the action taking place on the dramatically raked stage of Chicago Shakespeare’s Courtyard Theater.

This production, running for a mere five days in Chicago, is part of Italy’s “Year of Italian Culture in America.” Billed as “a journey that will reveal today’s Italy, its brilliance and its excellence anchored in the present and driven by an unparalleled past,” the full year includes showcases of everything from theater to science to light installations and poetry readings. And De Filippo’s text, written shortly after the devastation of World War II, is a prime candidate to reveal Italian excellence on stage, particularly as interpreted here by Servillo (in both his capacities as actor and director).

Early one morning, Alberto and his brother Carlo (real-life brother of Toni and darn good scoundrel-portrayer, Peppe Servillo) summon the police to the house of their neighbors, the idiosyncratic Cimmarutas, with accusations of murder and cover-up. But almost immediately after the police have rushed the Cimmarutas out of the building and off to jail, Alberto, who moments before claimed to have witnessed the crime, suddenly worries that he may, in fact, have simply dreamed the whole episode the night before.

Gradually what had been a mostly comedic and slightly rambling piece set in a simple kitchen unfolds itself to reveal a rigorous and slow-building examination of conscience, family, morality and reality. As Lino Fiorito’s starkly minimal whitewashed kitchen set breaks away to a dreamlike warehouse of chairs, Alberto questions his memory and worries for his safety, while the various Cimmarutas, each for their own reasons, separately implore him to produce the evidence he claims to have. In the face of an accusation on the household, all loyalty is lost. 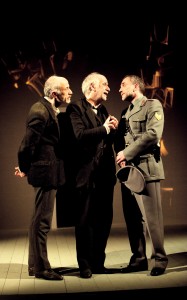 But though “Inner Voices” delves into the depths of human nature and the implications of societal apathy (“Without respect murder is possible.”), it does so with a surprisingly light tread, tip-toeing through finger pointings and emotional wailings with one eye always on the absurd. Comedic timing is difficult to maintain when a punchline can be read over your head in one language a few moments before you deliver it in another, but Servillo’s cast rely on the strength of their performances to overcome this obstacle, rather than resorting to more heavy-handed physical comedy (which is a very real possibility with this script).

Servillo, perhaps best-known Stateside for his turn as a slimy money launderer in the Golden Globe-nominated “Gomorrah,” has been billed as “the best Italian stage and screen actor of his generation” by the New York Times. As the endearing Alberto he mixes strength and weakness, carefully guiding the audience along the thin path that separates fantasy and reality. And though Servillo is featured in nearly every scene, through a shrewd mix of his own acting acumen and directing talent, he manages to make Alberto fade back, bringing his co-stars forward to drive the scenes.

This subtle adjustment turns a leading role into consistent support and drives home the relationship between Alberto and the briefly glimpsed reclusive Uncle Nicola (sound designer and stage manager Daghi Rondanini), who has forsaken humanity and retreated so far into the shadows that he rarely appears to anyone and only speaks through shooting off a succession of fireworks (earning him the name “The Gunpowder Poet”). As the play nears its well-earned conclusion, the wisdom of turning from a corrupted society is painfully evident.

“Inner Voices” may not be quite worth the FOUR curtain calls it received on opening night (a new record for this audience member), but it’s certainly an intriguing piece and a rare opportunity to witness Italian theater without crossing an ocean for it. (Zach Freeman)