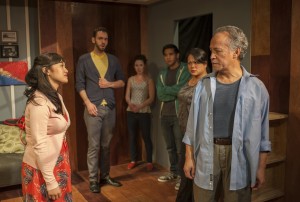 Just in time for Pride and the death rattle of DOMA, Bailiwick Chicago offers a heartfelt portrait of a family redefining itself after a loss as its members fail to connect. It’s a poignant look at how family and culture impact us no matter how much time and distance passes.

Reyes captures the immature charm of the drifting Mikey, who needs to regain his passion for his art as well his sense of his family history; Byrnes’ character is the calming influence that guides Mikey toward resolution. Bajuyo imbues his character with a longing for validation; his character embraces only the conservative traditions that benefit him. Garassino’s tightly wound Mari nicely depicts a woman struggling to honor her mother by keeping the family from unraveling.

Danny Bernardo’s script hits a few notes that lack nuance; you can almost hear the minor chords play as Mari foreshadows the secret that threatens the family. But for the most part the script unlocks the right combination of fast-moving farce and family drama, and provides a rare look into Filipino culture. Interestingly, Bernardo assumes Mikey’s sexuality is no issue; if the Reyes family is as conservative Catholic as the playwright indicates, that angle might be implausible. But I found Bernardo’s willingness to give the family credit for their tolerance refreshing.

Erica Weiss’ direction is properly mindful of the piece’s all-important pacing and tone, but her staging on Stephen H. Carmody’s basic set seems labor intensive; every vignette is followed by a major scenery shift that cuts into the rhythm of the show. Christopher Kriz’s poppy yet exotic sound design seems a bit repetitive during scene transitions; the tech doesn’t flow as smoothly as the performance decisions.

But the show’s flaws fail to detract from the Reyes family’s likability; we root for them to come to an understanding and offer each other the love and support each family member needs. That’s what marriage and family is about. (Lisa Buscani)