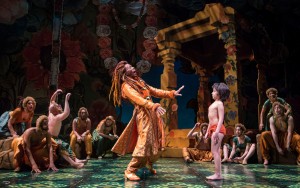 His room is but a speck on the Goodman’s looming proscenium. It isn’t all sooty; some furniture is bathed in a particularly unattractive forest green. Not quite ready for bed, the boy cracks open a book and begins to read. Then, almost instantaneously, a massively tall woman sporting a fashionable, feathered hat steps through the door. She is a peacock. The warm Ms. Peacock silently takes the boy by the hand and leads him through the doorway; the encumbering walls spin away and a fabulous collage of nature is revealed. That child is Mowgli and this ageless jungle before our very eyes belongs to Rudyard Kipling, the Sherman Brothers, Walt Disney and, now, the director Mary Zimmerman.


With her stage adaptation of Kipling’s 1894 “The Jungle Book,” which opened tonight at the Goodman Theatre and incorporates many of the 1967 film’s scenes and the Sherman Brothers’ beloved songs, Zimmerman has both pushed against the preconceived notions of what a musical should be and completely given into the style’s conventions. Her tendency is to treat this material no differently than her previous works until the familiar ensemble musical numbers, which are choreographed by Christopher Gattelli in a manner expectedly twee. Outside of the fun-however-spastic “I Wanna Be Like You,” sung with concert gusto by André de Shields, every song roars dully, regardless of how energetic luminaries like de Shields and Larry Yando perform them. Passively looking onward, we long for something euphoric or nostalgic to pop out from behind the brush, but receive only the restful calm of artificial bedtime nature sounds.

Of course, there was never any expectation for Zimmerman to suddenly wander over to the traditional side of town. Her past productions like “Metamorphoses” and “Candide” have few qualities of normalcy beyond their particular reverence for creative oral storytelling, a genre that’s enduring a mainstream resurgence. If anything, there was widespread clamor for Zimmerman to come up with an outlandish “Jungle Book”—cheaper than booking a plane to India and more fanciful than an actual jungle tour. One cannot deny, however, that “The Jungle Book” is thoroughbred family fare. Weirdly, I could only spot one child in the audience on Sunday night, but kids are a wide chunk of this musical’s target audience if it is to have a life beyond its Goodman and Huntington Theatre Company world premiere. In its losing battle to lend the material some theatrical distinction, the show ends up mostly uninteresting to young and old alike. 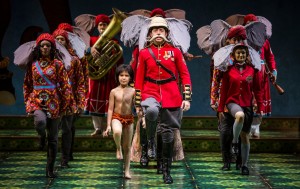 Unusual for Disney, which is typically married to storybook plotting, the crux of “The Jungle Book” is not a romantic fairy tale, but sequenced charismatic figures amidst environmental exoticism. Perfect for Mary Zimmerman, you might think. “Candide” was similar, albeit strung together by Candide and Cunegonde’s long-distance relationship and Pangloss’ Voltairian narrations. And “Metamorphoses” is little more, but so much more, than thematically tied Ovid stories. “The Jungle Book”’s vignettes, as interpreted by Disney, are not so much witty or insightful as they are entertaining. Yet entertainment has largely been shown the door in the Goodman’s production.

Daniel Ostling’s initially lavish set wanes in appeal as the play progresses. The lushness of the jungle is approximated by layers and layers of two-dimensional illustrated flowers, birds and greenery recalling the Baden-Powell Scout Book, Beatrix Potter and every ornate stairwell tapestry you’ve ever seen. Maneuvering the panels up, down, inward and outward alters their shape, but does little to change the tonality of the location. In that respect, Zimmerman has succeeded in creating a single environment. In an actual jungle, you might hear birds chirp, frogs ribbit and panthers growl all in a unison indistinct chorus. The songs—here with new more recognizably Indian orchestrations by Doug Peck, including the sitar, daf, tablas and dholak—do just that and are hampered by their inclusion in this sensory smoothie. In order for this show to compel, every song and scene must display the jungle from a different angle.

Despite Mowgli’s slight arc—is this man-cub more man or cub?—Akash Chopra’s adorable performance is precocious and amazingly empowered for such a young actor. I’ve witnessed far more experienced actors’ confidence waver on the Albert stage, but each and every step that Chopra takes is remarkable in its assurance. His Mowgli pairs nicely with Kevin Carolan’s easygoing Baloo (Carolan also dons the worst of Mara Blumenfeld’s ugly costumes. Baloo, a friendly bear, wears hoop dress frames atop beige street clothes), whose ever-hummable “The Bare Necessities” (by Terry Gilkyson) is a Tootsie Roll-like confection. Yando as Shere Khan, de Shields as King Louie and Akela, and Usman Ally as Bagheera all deliver graceful turns, but are victims of the production’s ill-advised conformity. However, Yando is afforded the finest scene of the musical, his death by fire, wherein an endless stream of red and orange flowers float upward, foreboding and serene.

Ever since the resounding success of “The Lion King,” which “The Jungle Book” with its young male protagonist and singing-dancing animals is forever doomed to be compared to, Disney has frequently paired its properties with forcibly aesthetic directors in hopes that the same artful-commercial crucible might be repeated. The opera world’s Francesca Zambello helmed “The Little Mermaid” and designer Bob Crowley took on “Tarzan.” Those were mixed successes here at home. Was Mary Zimmerman the right choice for “The Jungle Book”? I think so. The musical’s final moment, which finds Mowgli back in his dark Victorian room, sad to be parted from the jungle of his (and Kipling’s) imagination, is unspeakably beautiful. The boy receives one last visit from Baloo in a move so breathtaking and unexpectedly clever that the simple, soundless morsel elicited gasps all around the audience. It was as viscerally affecting as a little girl hugging her greedy father Midas before being frozen forever in gold. Somewhere in the pages of Zimmerman’s “Book” are more of those spectacular childlike moments idling, waiting to be found. (Johnny Oleksinski)