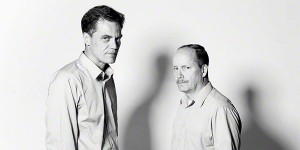 The Untitled Michael Shannon Profile, Scene Four: “Guy’s Theater”
Another day of rehearsals and Dado is seated in a chair. At her feet, Shannon sits on a stair and Van Swearingen, the founder of AROT, sits on the floor, legs half-crossed. They’re getting notes from a rehearsal the night before of the first scene of the play, a long encounter between Carter and Vinnie. An air of mutual respect permeates the room. “I keep jumping your line right there, Guy, I’m sorry,” Shannon says at one point. Van Swearingen responds politely, “That’s okay, I am probably doing the same to you.”

If you want to distill this show to its essence, if you want to know why it is happening, why it is so important to Shannon, to everyone at AROT, this is it: Michael Shannon and Guy Van Swearingen, acting together, again. Shannon says his co-star “works harder than anyone I know. We worked really hard together, making things happen at this theater. There was a period where we were like brothers. It’s kind of like in the play. That’s why this play is so interesting to me, ‘Simpatico,’ just having me and Guy play these people, because there’s a similarity in terms of bond that the characters have in the play and the bond me and Guy have.”

After twenty minutes of conversation or so about the first scene, they rehearse the play’s final scene. It’s an intense, physical performance, especially from Shannon, who spends much of it writhing around on the floor, sometimes tangled in a blanket, sometimes face planted directly into the tile. Even now, he’s inhabiting this character like I’ve not yet seen him do, taking Carson into a state of complete dysfunction. He does this in actions both large and small: his tics, his vocal intonations, his mannerisms have a casual authenticity that make it easy to forget that each and every one of them is a choice, a considered act. Once or twice, Swearingen forgets and calls out “Line!” which the stage manager feeds him. It’s not unusual for this to happen in rehearsal; I’d seen it with Girten days before. But I never see it with Shannon. Even though he’s just gotten into town less than a week ago, and just resumed rehearsing days ago, he’s stone cold with his lines. But as well as he knows them, he never stops studying them. Every time I see him not acting in a scene, his face is in his script, pencil in hand. Wherever he is. The words have to be strong to hold up to such scrutiny. They run the scene twice before a break, and I see Shannon’s performance transforming from one run to another before my eyes, getting richer, more pronounced, more detailed.

Later, I ask Shannon about his acting technique, about his intense study of a script he clearly knows. “It’s about observation, about not taking anything for granted,” he says. “It’s about not taking what your character does or says for granted. Everything happens for a reason; everything you say is for a reason. Every single word that you select in your mind to say is for a reason—that’s why I’m always looking at the script. Like at one point my character says the word ‘vendetta’ and I was thinking about that all day: what is a vendetta; what does that really mean? I’m looking at the script all the time because to me the writing is paramount to anything else.” He continues, “A lot of people say, ‘What do you do for research?’ I say I research the script. I look at the script. Sometimes the actors who are more focused on the character are not even saying their lines right. I like to say my lines word for word and I’m trying to understand why I’m saying what I’m saying. That’s why I’m always picking up the script and working at it—I’m going over it to make sure I’m not missing anything.”

On break, outside the theater, I meet Swearingen and we chat amiably. Swearingen started AROT in part because it was hard to land roles that could accommodate his peculiar schedule as a fireman, a public service job he still holds twenty years later. It’s easy to see why Shannon feels such a bond to this guy. He’s as likable and self-effacing as they come. He’s much more interested in the welfare of me, and Newcity, than in pushing his own agenda.

The Untitled Michael Shannon Profile, Scene Five: “A Fanboy Meets His Match”
A few hours later, I meet up with Shannon at the Old Town Ale House for a planned interview. He’s there because the Tribune wanted to take his photo in that location, and because it’s the hangout of the AROT ensemble. He’s clearly relaxed when I arrive, a beer in hand while he shoots the breeze with the bar’s owner and a row of gray-haired regulars, along with the publicist and the Trib’s photographer. A young bar patron suddenly appears and extends his hand to Shannon, saying he wants to congratulate him on his performance in “Man of Steel,” adding, “I didn’t really like the movie that much but you were great. You made the movie.” It’s the kind of encounter that probably would happen a million times a day to movie stars if they didn’t live in protective bubbles, if they were hanging out in a neighboring watering hole rather than surrounded by tightly controlling entourages, but Shannon’s still relatively new to this type of engagement; indie film fans don’t openly genuflect. So instead of brushing off the insult buried in a compliment, he pounces. “What do you mean, exactly, when you say you did not like the film?” he says inquisitively. “Tell me precisely what you did not like about it?” The fanboy did not expect this, but starts talking about his expectations for a Christopher Nolan project (“The Dark Knight” director produced this film, which Zack Snyder directed) and how, in fact, he thinks Batman is a much better character than Superman because of his humanity, and so on. In other words, the stuff all comic geeks recite as scripture. “I think Superman is better,” Shannon retorts. “He doesn’t wear a mask.”

The Untitled Michael Shannon Profile, Scene Six: “He’s In the Band”
It’s far too late to get in on the ground floor of Michael Shannon movie-star fandom. That ship sailed with the Oscar nomination. But he fronts a folky rock band, Corporal, and you can be a downright charter member of its fan club. I’m Spotify follower number nine, for crying out loud. Consider other famous actors making music: She & Him (Zooey Deschanel), 115,367 Spotify followers; 30 Seconds to Mars (Jared Leto), 237,828 followers; Dead Man’s Bones (Ryan Gosling), 16,612 followers, and many more. I have a secret fantasy for Shannon’s band, and that is that because of this story, Corporal will rocket past Adrian Grenier’s The Honey Brothers’ 150 followers and, dare I dream big, Leonard Nimoy’s 379.

The story behind Corporal is long, but it owes its origins to an Adam Rapp show Shannon did at the Humana Festival of New American Plays called “Finer Noble Gases” that required the cast to join a real band. Long story short: the band bug bit. In fact, in Bizarro World, Shannon is a musician who dabbles in theater. “I was a musician before I was an actor,” Shannon explains. “I started with piano, I was in the orchestra, I played bass and viola, I was in the jazz band in high school.” In Corporal, he’s the frontman, singing and playing guitar and, get this, he’s playing a show for AROT on July 29, subject to “Boardwalk Empire” filming schedules, at Metro. “I never thought in a million years that I’d ever play Metro,” he says. “It’s pretty mind-blowing, actually. I’ve seen a lot of shows there. That’s my favorite venue to see music.”