The Untitled Michael Shannon Profile, Scene Seven: “A Brief History of Michael Shannon”
Michael Shannon seems to have the typically dysfunctional back story but he’s remarkably untroubled by it, at least in interviews. His parents divorced and remarried at least five times each, resulting in him having four half-sisters and one half-brother. Shannon became “an only oldest, youngest middle child,” he quips. “I’m all four.” After his parents split up, he spent much of his youth in his native Kentucky, with his mother. It was there that he discovered theater. “I was looking for something to do after school and they had something called ‘Speech Team’ and I went in for the tryouts and they said, ‘OK, tell a story.’ So I told a story and then they said, ‘We’re going to give you a little speech to memorize.’ It was a monologue from the ‘Lake Wobegon Days’ by Garrison Keillor. And that is when it started. I went home, memorized the monologue and practiced it all the time. I was an alternate. I wasn’t on the A squad; I was there if someone got sick. (Echoes of the tale where Michael Jordan gets cut from a high-school basketball team, I think as I hear this.) 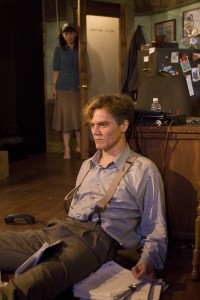 He came up to the Chicago area for high school, attending New Trier for two years. He returned to Kentucky, then back to Evanston High, where he dropped out to audition for plays. Since his father—now deceased—was a professor at DePaul, needless to say this educational truncation was probably not well received, but Shannon does not attribute any of his early moves to a parental push one way or another or, for that matter, to hearing any particular calling. He just liked doing plays, he says. “The first play I ever did here was at the [now defunct] Illinois Theatre Center. It was a play called ‘Winterset’.” From there it was “Fun and Nobody,” where he hooked up with the director Dexter Bullard (“whom I’ve worked with probably ten times since then”) and, notably, Tracy Letts.

The Untitled Michael Shannon Profile, Scene Eight: “If Not for Tracy Letts”
Diligence may be the mother of good luck, but sometimes good luck is immaculately conceived. In his second professional outing, at the ripe old age of sixteen, Shannon had the good fortune to be cast alongside a young actor named Tracy Letts in “Fun and Nobody” by Howard Korder (who now writes for “Boardwalk Empire,” Shannon notes). Letts, also then a budding playwright, soon after had the good sense to cast Shannon in his first play, “Killer Joe,” as the son Chris Smith. “It was like skipping a stone on a lake and having it go twenty times,” Shannon recalls. From its tiny Chicago storefront origins, the play went to Scotland, London and New York and Shannon did 400 performances in that part. Today, Shannon calls Letts “probably the most significant person in my career.” (Ironically, by the time “Killer Joe” was made into a movie, Shannon was too old for his part. “Friedkin called me up,” Shannon says, “and said, ‘Do you want to play the dad, Ansel?’ I said, ‘No fucking way, man. I can’t play the dad. I played the son 400 times. I can’t play the dad. The son hates the dad. That’s like asking the devil to play Jesus.'”) Though his days of bringing Letts’ characters to life on stage are in an increasingly distant past, Shannon says, “I’d love to act with him again. That’s what I’d honestly like to do.”

The Untitled Michael Shannon Profile, Scene Nine: “About Those Bugs”
If Letts’ “Killer Joe” was Shannon’s launching pad, another Letts play helped define him as a master of the unhinged. He played the insect-obsessed lead, Peter Evans, in “Bug,” from its London premiere on through Chicago, where he was doing it at the time of 9/11 and onto the 2006 film, directed by William Friedkin. A weird coincidence: Shannon’s grandfather was a bug scientist, Raymond Corbett Shannon. “A very highly respected entomologist,” he says. Not so coincidental, I suspect, is that Shannon still seems finely tuned into the little pests: during our hour-long interview he swatted at a fly and later tried to kill a small insect on the table. It was a Peter Evans moment, honestly. But the fly was definitely real.

The Untitled Michael Shannon Profile, Scene Ten: “Home is Where You Clean the Toilets”
After the photo shoot, Shannon has a bit of time before rehearsal, so we poke around the AROT offices, in the apartment above the theater. I ask where the theater’s name comes from and he tells me it’s a passage from William S. Burroughs’ “Naked Lunch” and then he cites the line from memory. He scoots around the office pointing to old posters, like a proud papa with a photo album. “The Connection” was the first AROT play—he came up with the central image of the saxophone morphing into a hypodermic needle, he recalls. Then, over here, is his first play at the theater, Eric Bogosian’s solo show, “Drinking In America.” He recalls in detail how the artwork for this poster came to be as well. Bogosian was an early favorite of Shannon’s. “I used to do the monologue from ‘Talk Radio’ in auditions,” he says.

Later, he recalls the origin of AROT, when he met Guy Van Swearingen in class. “One day, Guy started talking about making his own theater. I actually had another theater company before Red Orchid that I started with another friend of mine but we didn’t have a space. I admired the fact that he was going to make a space so I asked if he needed any help. He said ‘Yeah, I need someone to do the box office, help me make the programs and help me design the posters.’ I was around—I wasn’t in the first show, but I helped out.”

Since then, “I’ve done everything. I house-managed a show called ‘The Caine Mutiny Court-Martial,’ which was one of our biggest hits ever. I probably built like twenty sets there. I cleaned the toilets. I cleaned the theater. I made the programs. I made the posters. I’ve done the laundry. I think I even stage-managed one night when the stage manager went down. I answered the phones. I directed once. Yeah, I’ve done a lot of stuff there.”

Talking to Shannon, it’s easy to see the wellspring of his commitment. No matter what we do in life, what we accomplish, it’s always those early days, the times when we struggled and fought and laughed and cried, it’s those days that never leave us. “To me,” Shannon says, “it’s not about how big the theater is or how much money they have, it’s about continuing relationships with other artists and with the theater itself. When I walk in that room, I have more history in that room than anywhere else on the planet. I have more memories, I have more experience. There’s literally nowhere else I’ve spent more time than in that room, that I can think of.” Needless to say, perhaps, but he says it: “If I come back to Chicago, I come back to Red Orchid. I really wouldn’t go anywhere else at this point.”