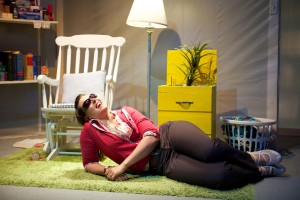 There’s nothing like a good plague scenario to set our imaginations whirring: we all wonder how we’d survive the zombie invasion or the next Black Death. Carrie Barrett’s new solo piece attempts to coach us through the end times with a few helpful tips that result in a compelling yet slightly uneven how-to for the doomed.

Sole performer Karie Miller begins the tutorial on Eleanor Kahn’s sanitized, primary-colored set, a survival shelter packed with life-sustaining supplies, plastic-wrapped for our protection. Miller clues us in on the importance of fragrance-free lotion in the apocalypse and the foods that make the best end-of-the-world repast (rice and any kind of pork). She lectures us on the origin of the coccyx (the bone at the top of our rears which was once our tails) and its role in instinctual emotion, as well as saying goodbye to those we care about without making a tear-stained mess of it. As bleak as the topic is, the information is engaging and fun; the audience doesn’t need to be coaxed into interacting with Miller.

The deft tone of the show takes a downturn when Barrett attempts to discuss the lecture’s purpose and the protagonist’s backstory. Her decision to tackle the issue directly deflates the piece a bit, which benefits so much from the character’s mystery. Sometimes, dramatization can benefit from avoidance-generated conflict rather than confrontation.

Megan A. Smith’s direction understands the piece’s demanding pacing and tone but still suffers from the playwright’s literal choices; as Miller’s character self-destructs, so does the set surrounding her. It’s a heavy-handed decision among many sophisticated ones.

Despite the script’s flaws, Miller’s appeal is central to the show’s success. She captures Martha Stewart’s primness and mixes it with Julia Child’s charm and accessibility; we like her and want her to survive. Her firm commitment to facing the hard times by evading them completely suggests a spirit that just might make it through. She might return to the world, if there’s a world to return to. (Lisa Buscani)