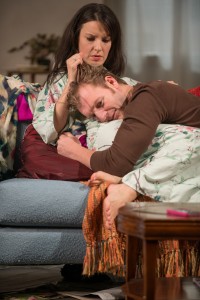 Belleville means “beautiful town.” It’s a neighborhood in Paris that, through its naïve moniker, comes to represent the entire fairy-tale French city. Paris is, without question, a beautiful town. But we temporary inhabitants—foreign day-trippers, students, interns—can easily forget the urban realities of the places we jet to. We dream our vacation would last a lifetime, lounging in perpetual bliss. After all, the book isn’t called “Eat, Pray, Love, Work.” But when the rent check arrives, does the romance depart?

That small reality check is only an inkling of what Amy Herzog’s “Belleville,” a stark examination of love amidst perceived obligation, is all about. Receiving a heart-stopping Chicago premiere at Steppenwolf Theatre, her excellent thriller provides solace and worry in equal measure by instilling that the most fearsome parts of life are often the most ho-hum. Such daily horrors are reflected in her anecdotal and observational dialogue: “You’re shivering. You’re not shivering, but you’re shivering.” And it’s apparent in the moments that make you jump: a crying baby, a ringing cellphone, the cutting of baguette. For a while, after we meet the couple, we’re convinced that a serial kidnapper might swoop in through the upstage French doors or a psychological-supernatural intervention à la Aronofsky’s “Black Swan” might come to pass. But “Belleville”’s perils are purely homey.


“Homey” also happens to be the cuddly pet-name Zack (Cliff Chamberlain) and Abby (Kate Arrington) give each other, spoken with the yuppie sweetness of an umpteenth trip to Crate & Barrel. A married couple in their late twenties, they moved from the United States to Paris to support Zack’s career as a doctor, caring for children with AIDS. What started out as a weekend trip evolved into a four-month stay, and now they’re contently, if not happily, living le rêve. Zack proposed to Abby six years earlier when she was a mere twenty-two. They seem so young, and by today’s standards for pair-mating they certainly are. But simplicity and, to some extent, family tradition tied the knot for them, and now they sit in a modern, but by-no-means-extravagant Paris flat (set by James Schuette).

What Herzog has done with her household circumstances is craft a completely domestic thriller, whose reflective qualities are devastating and terrifying for an audience. Or, for some of the audience. A testament to the playwright’s multigenerational appeal—a quality found equally in “4,000 Miles,” “Great God Pan” and “After The Revolution” as well—is the Rolodex of perspectives on any given situation. Many in attendance on Saturday afternoon, notably the older set, belly-laughed all the way through the show. I wondered to myself, “Have they weathered this storm before? Do they sense an underlying triviality?” In the initial scenes, though the play throbs with nerve-wracking tension, you might sense a comedic trajectory. The conflicts are petty fights. Is that your pretty secretary on the phone? Did you smoke more than one bowl? However, Herzog’s ultimate message is far from petty.

The playwright has her finger on the pulse of this uncertain moment when the young are expected to grow up following the previous generation’s rubric, but can’t. Two decades ago, twenty-five was adulthood. Now, a struggling global economy has kept recent graduates in stasis. So, while adult pressures accrue, the means with which to solve them remain elusive. Thus, Zack and Abby.

Arrington’s Abby wears a yoga instructor’s leg warmers and gray-knit shawl. She slips passive-aggressive insults that masquerade as wit to Zack at every opportunity. She quips and deflects all she can to avoid real, honest connectivity while freely admitting that happiness is, by choice, not within her grasp. Abby’s true misfortune is that she, despite any implications about her frail mental health, is not ready for a relationship of this magnitude. Equally immature, Zack is a sublime creation of Herzog, and Chamberlain delivers one of his finest performances yet in the role. Zack’s behavior throughout the play changes very little, but our perception of him is in constant flux. After his early, comic, puppy-dog faces when he is caught in flagrante delicto (albeit solo), his shifty interactions with landlord Alioune (Chris Boykin) evolve him from friend into maybe-foe. Alana Arenas plays Alioune’s wife, Amina, a pensive part whose importance beyond a foil for Abby goes largely unacknowledged. A more vital fifth character here is Matt Frey’s menacing, shadowy lighting design.

The tie that binds all of Herzog’s plays together is her keen eye for relationships—familial, romantic, friendly—and their nuanced complexities. While there is certainly a sophistication to the plotting of “4,000 Miles” and “Great God Pan” (less so in the latter, Herzog’s weakest play to date), their reliance is on the unique onstage pairings: A teenager and his grandmother or an adult and his gay middle-school pal. “Belleville” though has a meticulous build.

The play’s ending does not succeed here in the way it was likely meant to by its author. The deception and ultimate actions are upsetting, yes, but hardly surprising. We nervously anticipate exactly what happens, so the revelations do not really warrant being called “a twist.” Part of that could be director Anne Kauffman’s wise decision to ratchet up the couple’s tension from the offset, rather than speeding toward the drama’s boldfaced conclusion. Her choice brings about a satisfyingly stressful hour-and-twenty-minutes with an early denouement, the resonance of which is not jaw-dropping shock but deeply felt sadness. Slow and grim is the proper wrap-up for “Belleville,” whose true shock lies in its unfortunate familiarity. Hell, it’s a Facebook tragedy. (Johnny Oleksinski)