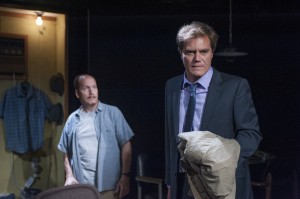 There’s a lot to say about A Red Orchid Theatre’s latest production. A lot. But there are three things you need to know up front. They’re all equally important, but you need to know them in this order:

Two: This is an ensemble piece through and through. Which means that though Michael Shannon is a Star (capital “S”), he doesn’t star in this show. He might not even be the actor who spends the most time on stage. The Michael Shannon I mentioned above, the one who starred opposite Jessica Chastain in “Take Shelter” and opposite Joseph Gordon-Levitt in “Premium Rush,” the one who could be called away at a moment’s notice during this show’s run to film HBO’s popular and critically acclaimed “Boardwalk Empire,” shares the tiny stage in A Red Orchid Theatre with five other actors.

Three: The five other actors (a cast consisting of four other A Red Orchid Theatre ensemble members and one newcomer) are so good that you quickly forget that you probably bought your ticket because Michael Shannon, the guy who as of this writing is #33 on IMDB’s very scientific STARmeter (by way of comparison, Will Smith is currently #87), is in it. Seriously. 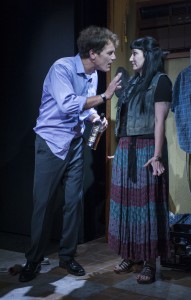 “Simpatico,” a not-so-frequently seen Sam Shepard play from 1994 (later adapted into a quickly forgotten movie of the same name in 1999), is a gritty, darkly comedic meanderer that centers on two long-time frenemies (surely Shepard would hate that word) and the repercussions of a scandal that rocked their worlds over a decade ago. As the play opens, with stagehands literally throwing Grant Sabin’s appropriately disheveled set together, Carter (Shannon) has ostensibly journeyed from Kentucky to Missouri to meet Vinnie (Guy Van Swearingen, at his most Robert Duvallian) and attempt to help him out of a tough spot. That’s honestly all the plot set-up you need.

Shannon and Van Swearingen, founding ensemble members of A Red Orchid Theatre and longtime friends, circle each other carefully in this lengthy introductory scene, trading barbs and warming up the room. Gambits are made, propositions are tossed out and rejected, and by the time Mike Durst’s lights (which remain fairly dim throughout) finally settle on this scene, the audience is fully immersed in the world that director Dado has created from Shepard’s potent (if slightly talky) script. Unpredictability is key for this slow cooker of a show and Shannon and Van Swearingen nail this stuff, with a heady mix of implacable calmness and explosivity.

Ensemble member Mierka Girten gives a subtly captivating turn as Vinnie’s seemingly guileless friend Cecilia, holding her own with Shannon in two powerful and often surprisingly funny scenes that further establish the thread of gritty, dark comedy. She later appears in a scene with ensemble member Doug Vickers (quietly scene-stealing as a man resigned to disgrace and anonymity) that is equal parts uncomfortable and achingly precious. There’s a moment where Vickers looks out the window of his tiny office that reveals the kind of inner prison to which a “free” man can willingly commit himself. When he opens that window, just a crack, to give Cecilia some air, it’s much more touching than expected.

But it’s Jennifer Engstrom, another ensemble member, who delivers the kind of performance that widens eyes and captures attention. As the drug-addled Rosie, whose relationship to Carter, Vinnie and the central scandal becomes clearer as the show progresses, Engstrom tears through her dialogue with Van Swearingen, creating a woman who is equally powerful and broken apart. Engstrom is only in one scene, but she delivers such a powerful punch here that it seems like more by the time the show ends. 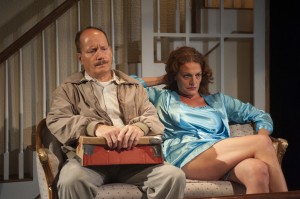 Sam Shepard is not the easiest sell. His scenes can stretch on long after a character has threatened (or been commanded) to leave a room. In the hands of a lesser ensemble this kind of repeated bickering back and forth can grow tiring. But Dado and her actors have not only found the subtle humor here, they’ve imbued every character with such life that it almost stops mattering what they’re saying to each other (no offense, Sam). Shannon and Van Swearingen, Girten, Vickers and Engstrom (and even newcomer Kristin E. Ellis, who delivers a solid, though brief, performance) commit to every minute of this nearly three hour show (the program claims two and a half hours but I call bullshit) and make the time fly.

This is undeniably an ensemble show. Still, there’s the magic of Michael Shannon. And yes, he’s truly great here. But he’s not great in the way I’ve seen other “movie stars” be great on stage, selling a kind of self-aware, larger-than-life persona in their characters that seems to project “I am a well-known actor!” to everyone watching. Shannon is so great that I forgot I was watching Michael Shannon, movie star. In the final scene of the show (after a second act Carter is almost entirely absent from), watching Shannon writhe on the floor of the theater in his boxers, watching him hold hands with the rest of the ensemble and bow, watching him subtly nod to himself before walking offstage, I thought to myself: “That guy could really make something of himself. Wait till the rest of the world hears about him.” (Zach Freeman)