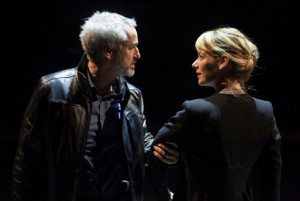 “A Steady Rain”-playwright Keith Huff’s newest caper, “Big Lake Big City” at Lookingglass Theatre Company, is a total bust. A wannabe satire of already what’s probably the most satirized profession, the police, this irritating play drags a group of Chicago’s topmost acting talent through the convoluted thicket of crude and juvenile comedy without remorse. Granted, sophomoric humor is usually a likable enough genre, but the cream of the crop always has some semblance of relevancy and bite. However, Huff’s jokes and plots are mothball stagnant and come across no less than two decades behind the times. “Book of Mormon,” this is not.


After an eye-rolling, “What is a story?” prologue delivered by one of sculptor Amedeo Modigliani’s limestone head statues in an Italian accent that sounds French, Huff’s story borrows its structure from ensemble television procedurals like “Law and Order” or “CSI.” We begin in a police station office occupied by a buddy-cop duo of detectives, Bastion “Bass” Podaris (Philip R. Smith) and Vince Getz (Danny Goldring). This episode of “Big Lake Big City,” though, might be the season finale, as a plot unravels involving Bass’ wife Ally (Katherine Cunningham) and her unscrupulous past with a Shaft-looking criminal named Elston Moss (Anthony Fleming III). Meanwhile, construction worker Stewart Perez (Eddie Martinez), through a misunderstanding with his firebrand brother, ends up with a screwdriver lodged in his brain, a mistake that introduces Detective Bass to Susan Howren (Beth Lacke), a TV stress doctor. In short, oddball characters are put in different combinations.

It’s tough to satirize cops in new ways, since “Naked Gun” and “Police Academy” have whittled down the subject to a nub. But police humor hasn’t been explored so much onstage, or at least in a production with high-profile visibility such as this one. Is that a niche to be filled? Perhaps, but not by “Big Lake Big City,” whose attempts at humor lie in an abundance of cliché and meta-theatrical contrivances. In David Schwimmer’s efficient production, the audience enjoys a car chase simulated by a remote controlled toy and a bunch of knowing in-jokes to the fact that they are, indeed, watching a play, but the laughs are always polite and never hearty.

This is well-tread territory for Huff. “A Steady Rain,” another play about two schmuck cops, also tapped into the popular perception of what cops are rather than engaging us with new information—only caricature and stereotype. It’s beginning to seem like Huff has very little fluency beyond the obvious for that which he writes so much about.

The deceptiveness of the play’s title also leaves a foul taste in the mouth. There is a built-in audience in Chicago for plays of and about the city, regardless of their quality. The resounding success of Huff’s overrated “A Steady Rain” and last season’s “Eastland” are indicative of such affections. There’s nothing wrong with an appetite for local stories, of course, which is why it’s so perturbing how vague and un-Chicago “Big Lake Big City” is, despite its hand-on-heart title. Frankly, the “Miami Vice” aesthetic and pacing makes it look like a teleplay out of Florida or Los Angeles. Scenes occur at the Park Hyatt and Navy Pier, but they’re rather akin to a Shakespeare play taking place in Italy. Specificity in name only.

What’s most unfortunate of all is that these actors’ performances are collectively ideal for these TV archetypes. Smith’s Bass has Richard Dean Anderson’s middle-aged bad boy abrasiveness, Lacke has a funny handle on the foggy ominousness of crime dramas and Martinez and Wendy Mateo ground the helium proceedings with their honest sweetness. If only this company’s prodigious talents were put to better use. (Johnny Oleksinski)