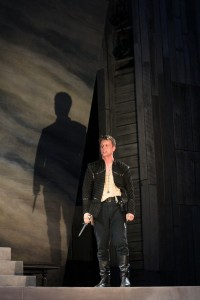 Despite its reputation as Shakespeare’s longest play, you won’t come across too many four-hour “Hamlet”’s anymore, unless Kenneth Branagh’s 1996 unabridged film version pops up late on television. These days directors make cuts to the play to the dismay of few. Of course, a performance’s length need only be a concern if you start to become aware of it, glancing down periodically at your watch or, in some cases, up at the stars. Plenty of three-hour dramas breeze by like a stranger in the night, and just as many ninety-minute one acts feel like an eternity. American Players Theatre’s sluggish outdoor “Hamlet” lands somewhere in the middle of those two extremes.

That’s weird for what’s easily Shakespeare’s most entertaining and accessible tragedy. Unlike “Romeo & Juliet,” in “Hamlet” there’s never any need to question what the relationships and desires are. It’s all laid out quite clearly by the Bard, and in a manner fairly consistent with our contemporary expectations. The play is one of the few that can sustain an operatic length because it is so engrossing. At the performance I attended, John Langs’ production clocked in at about four hours and twenty minutes including a thirty-minute rain delay. A long evening of theater is not the problem here, but it’s the pacing’s repercussions on Hamlet, an extremely well-educated character with a crackling wit, that are cause for concern. When his speech slows down, our respect and patience for his cause diminishes.

Matt Schwader plays a Danish Prince defined by his modern, youthful self-deprecation. He chestily whines before immediately dismissing the outburst with a sarcastic deadpan, as though casting judgment on the character’s grief. That’s okay; Hamlet understands that the tragedy unfolding around him is much grander than a vengeful son’s sorrow. But the pacing of his text is an elephant parade when it should be a freight train. The entire production is that way, not only in speed, but in texture. It is interpreted with little urgency.

“Who’s There?” says Bernardo as the play commences. Several seconds go by. Francisco chimes in, “Nay, answer me: stand and unfold yourself.” A few more seconds pass. “Long live the king!” There is a metered reasoning for why there might be pauses there, but the tempo is what drags. “Hamlet” must be brisk. It’s a chase-story of sorts and everyone is constantly on edge in anticipation of the next event. King Hamlet has died, a war is on, Norway’s Fortinbras looms heavy. “Something’s rotten in the state of Denmark” is not some chummy laugh-line, but a dire observation.

The actors, costumed by Alejo Vietti in an array of classical-modern clothes, are, to be sure, appropriately cast. Deborah Staples and Jim DeVita would seem to make the ideal Gertrude and Claudius, but they create no heat. Likewise, Staples and Schwader’s bedroom scene has plenteous maternal care, but it’s absent of ferocity. Part of a far more violent culture than our own, Gertrude worries that her son, swept up in the throes of madness, is about to murder her. We need to believe that he could, or, that she believes he could.

A wonderful performance is Cristina Panfilio’s Ophelia who, in her madness, becomes more of a rebel than a victim. As the inexplicably motherless girl watches all the powerful men around her fall prey to circumstance, rather than wilting like the flowers she carries, she thuds about like the stones this production has replaced those flowers with. It’s ten times more disturbing and heartfelt to watch this woman brazenly attempt to summon up some strength rather than instantly succumbing to her own perceived weakness.

Langs has staged a capable “Hamlet.” Shakespeare’s story is told and the outdoor environment is, as always, a marvelous respite from the world-at-large. Intriguingly, Langs inserts dark, out-of-the-blue moments like Hamlet rubbing his dead father’s ashes on his face, but the director fails to maintain that macabre sensibility. The tone, which has the potential to blaze with the fire of hell-hounds, is disarmingly light. One wonders if the creative team is already thinking ahead to “Rosencrantz and Guildenstern Are Dead,” Tom Stoppard’s mathematical comedy, which will be performed with the same cast later in the summer. (Johnny Oleksinski)