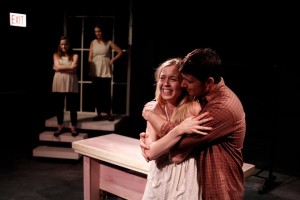 I took an Introduction to Philosophy course in college. One of the few questions posed in that class that still seems interesting to me is the one that playwright Scott T. Barsotti addresses almost immediately in “Facing Angela,” his philosophical and somewhat dreamlike exploration of a relationship falling apart. The question, known as Theseus’ paradox, basically asks: “If you replace every plank of a ship, piece by piece, is it still the same ship?”

And the answer is… what? There is no right answer. This is philosophy with a capital “P.” And as Barsotti’s play opens, Wes (Neal Starbird) recounts to the audience his own version of this classic, describing how his uncle once rebuilt an old car, carefully replacing original parts with new parts until the car was totally rebuilt. So, was this the same car? Though his uncle swore it was, a young Wes couldn’t comprehend how. “Could it be, really, that identity is nothing more than location?” he pleadingly asks of us.

And that seems to be the central question here, as Wes’ wife Angela (played with aplomb by everyone else in the cast), who suffers from the questionably realistic and impressively theatrical condition of being allergic to her skeleton and skin, goes through a series of painful, complicated surgeries to save her face as it tries to eat itself away (represented in gory detail by makeup designers Ally Renee Amidei and Sarah Scanlon).

But as Angela recovers from each of these surgeries (“Cut. Peel. Strip.” the chorus of actresses declares hauntingly after each), she emerges not only with a new face, but with a new personality to boot. And Wes, understandably, has trouble dealing with this. What is happening to his wife and, as a result of this, to their previously stable relationship (of which we get precious few tantalizing flashbacks)? 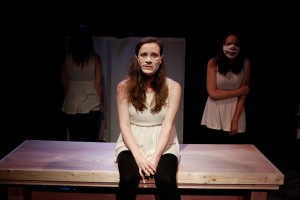 Director Kyra Lewandowski approaches the material with a palpable cautiousness. Actors almost seem to be traversing Nick Shaw’s simple, symmetrical set on tiptoes. Starbird’s Wes certainly converses with his ever-changing wife with a level of quiet concern that emanates out into the audience.

There’s plenty of very relatable horror (a genre Barsotti revels in) to go around here. Anyone can relate to the very primal fear of a slowly dissolving relationship. In an ideal world couples grow and change together. But what if they don’t? What if one person slowly becomes someone else? And what if they no longer need you in the way that they originally did? Where does that leave you? And where does that leave your relationship? It’s a troubling topic to address and this show almost captures that painful fear.

The problem here is that, despite the casting of five quite different and quite capable actresses as the evolving character that is “Angela,” there never seems to be enough difference in the way that Angela and Wes interact. The changes in Angela are certainly implied in the dialogue, but they’re not displayed enough in front of us. They’re meant to be subtle (occurring over five distinct Angelas) but without heavy exposure to the original “Angela” and the original connection between the couple, it’s hard to really dig into the horror of it all.

Barsotti recently workshopped this script (starting with an original script from a decade ago) with The Ruckus in order to get the story where it is now. The result is promising (the concept alone is worth checking out the show for) but a little bit more work may be in order before this script is finalized. But if you replace enough parts of a script, at what point does it become a new script? (Zach Freeman)

At the Athenaeum Theatre, 2936 North Southport, ruckustheater.org. Through July 28.