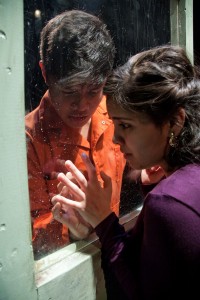 A man stands alone at the end of a long runway, unable to move. On the other side are his three children and, in the middle, perch two threatening immigration officers. Each kid primally clamors to reach their father, ducking under the arms of officials, attempting to psych them out with strategy and unabashed love and determination. In this optimistic short story, they succeed, and the final searing image is a parent and child’s tightly clasped hands.

Whether or not you’re an actor, there is a strong possibility you’ve played a theater game or two. Offices often hold team-building retreats with ImprovOlympic or Second City to get employees out of their shells. Trust-falls, anyone? Often these are a little silly, although I’ve witnessed many theater explorations become jarringly personal and compelling. But none have been so moving as what I saw last Monday afternoon at Albany Park Theater Project.

“To know that’s a possibility for me, my dad and my family—it’s crazy,” says JP Marquez, an undocumented Filipino immigrant and quite possibly the most charismatic fellow I’ve ever met. This understatedly vital company, co-founded by Producing Artistic Director David Feiner in 1997, empowers local teenagers to create deeply personal, politically informed theater and consequentially become motivated and well-rounded future adults. In addition to the artistic element, the theater provides two-thousand meals a year for its hardworking young actors, as well as college counseling and tutoring. But beyond these tremendously important services, it’s evident that these kids just like spending their time there. So did I.

They are all deeply connected to the stories they tell onstage, especially in this instance, as several other company members are also undocumented immigrants. Some productions feature their own stories and others that the actors create using interviews they conduct. JP is coming to the end of his fifth and final year with APTP, and you can sense his veteran status. “I show the new kids the ropes.” During the exercise where the children were trying to reach their father, JP loudly encouraged Paloma, Rico and Lilia from the sidelines. “There you go!” “You got ‘em! You got ‘em!”

Both JP and Lilia Escobar, herself a third-year veteran, owe a lot to Feiner and APTP. Lilia, who started out with the company as a timid girl, believes the roles she’s been able to play have brought out her inner strength. “It was almost as if APTP was telling me I could be this strong woman before I was.” Both came through the company’s college counseling program (In the fall, JP will  attend Beloit College and Lilia, St. Olaf) and took advantage of actor-magician Brett Schneider’s ACT prep classes and math and science tutoring. They tell me that Schneider’s ACT classes are amazingly a lot of fun.

Against my assumptions, according to Feiner, no APTP alumnus in fifteen years has ever gone on to major in theater, with most deciding on social sciences, education or a related field. JP though, like a few in this current pack, is focusing on biology. That is not the typical road taken by performers at the Goodman Theatre, where the company’s popular “Home/Land” is about to begin a nineteen-performance run, completing the 2013 Latino Theatre Festival.

The young performers seem unfazed by the bigger, illustrious venue. While everybody else around the country is concerned about a developing culture of conformity, these technicolor clothes light up the Laura Wiley Theater with unrivaled uniqueness and individual expression—flower tights, yellow pants, blue shoes, lime green shirts, purple shorts. Their confidence astonishes me. Really, these guys don’t seem flustered by much of anything. The same day I’m hanging out with them, a CNN camera crew is on premises filming a multi-part documentary entitled “Chicagoland,” produced by Robert Redford. Yikes.

As a group of actors sits in an oval with Resident Director Rossana Rodríguez Sánchez reflecting on what they’d just experienced, a boom microphone hovers imposingly above their heads. But the crew in no way stifles their honesty. “What does it feel like?” asks Sanchez of an “officer.” Through gasps of air concealing tears, Gibran Carrisoza expresses the sensation of robotically keeping a girl away from her father. “It sucks,” he says. The other officer, Kito Espino, who only just graduated from eighth grade, adds, “It’s terrible how people can do that to someone without feeling.”

“Home/Land,” APTP’s third appearance at the Goodman, is all about immigration: the trials of emigration and the tribulations once you find yourself on American soil. Feiner, directors like Sánchez and Stephanie Paul, director-designers like Mikhail Fiksel and the acting company have crafted a play of ritual, gesture and resonance, but one that’s not without its humor. A particular scene called “Who Wants To Be An American?” has a gameshow host grill an undocumented immigrant stopped in traffic. During that rehearsal I laughed a lot, but I couldn’t deny the power of the underlying message. Pretty much everything APTP does has some weight to it. “I don’t understand how other people do theater. I don’t know how to come out there for pure entertainment,” JP says adamantly. I can’t believe he’s a high-school senior. “Real stories are so much more powerful.”

“Home/Land” begins at the Goodman Theatre on July 19 and runs through July 28.  For tickets, visit GoodmanTheatre.org/HomeLand