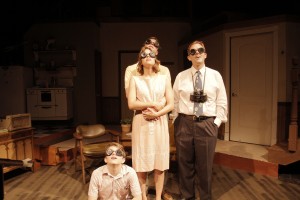 Theater is sharing its wardrobe with television these days.

Some of our best playwrights have day jobs on TV shows such as “Mad Men” and the fallen “Smash.” Additionally, those stage writers that don’t actively work in television are, like most of us, watching a whole lot more of it than Arthur Miller did. What has marked so much TV—and transitorily theater—are slow-boiling, season-long arcs. In theater, that translates to inaction; a flurry of smart ideas, anchored in the usual psychological ailments, that are slowed down to a supine awkwardness aiming to hold a mirror not up to nature, but up to nature’s nostrils.

True, there is nothing outright wrong with hyper-realistic storytelling, that is, until an audience realizes just how far away the person actually is. They are removed. They are bored. A few playwrights like Annie Baker manage quite well without an excess of words because of their meticulously crafted and deliberate pauses. Chance Bone and Andrew Burden Swanson’s new play, “The Casuals,” however, has its novel conceit held down by languid, precious dialogue and winding structure.

Presented by Jackalope Theatre in a production directed by Jonathan Berry, “The Casuals” succumbs to its own idleness. Characters’ big emotions are restrained, and the tension that a burdensome secret should carry is undone by tangled detail and vague consequences.

The 1955-set drama depicts a Korean War radio announcer, Richard (Ed Dzialo), taking a job back home interviewing potential operatives for a confidential government mission. Dzialo sounds like Casey Kasem if Casey Kasem took up crochet. On John Wilson’s cabin-looking cross section of a house, Richard’s attic office stores some of the interview tapes he’s stolen, a ghostly reminder of his unfortunate past. The only taped interview we are privy to is with a man named Les (Brad Smith). Smith, in his brief stage time, gives the best performance of Jonathan Berry’s production, easily filling the Storefront Theater without forcing an olde-tyme affectation or subjecting the audience to squeezed anxiety. Several years later, Richard is in a relationship with Les’ widow, Lucille (Somer Benson, Walton-like), and the true nature of the death of Les, also a father to thirteen-year-old nerdy Tim (Sam Kurzydlo), is obfuscated by Richard’s tales.

The radio announcer’s family relationships are similarly strained by his well-intended fibs, commonplace for his nephew Tom (Morgan Maher), who is visiting with his wife Jessica (Ellie Reed) that he just eloped with. Tom’s father Dennis died while serving in the war with Richard, and the circumstances surrounding his passing are, like Les’, murky. Richard is the common denominator in all of these broad miscommunications, and his wavering makes us wonder if we are smart to place our trust in such a troublesome fellow, meek though he may be.

What stymies “The Casuals” is its obsession with the slow reveal. Ultimately the setting is the familiar, dingy postwar living room. The dark underbelly of forgotten America is exploited frequently nowadays, attacking its undeserved nostalgia. And that thread of Bone and Burden Swanson’s play indeed fascinates. Richard lives on the edge of a nuclear testing site, which, while ringing of the scientific improbabilities of “Indiana Jones and The Kingdom of the Crystal Skull,” is rife with that powerful sensation of being on the cusp of something new, something bright, something destructive. As of yet, however, the journey to the bomb is secluded and resultantly slogs. (Johnny Oleksinski)

At the Storefront Theater, 66 East Randolph, jackalopetheatre.org. Through July 28.