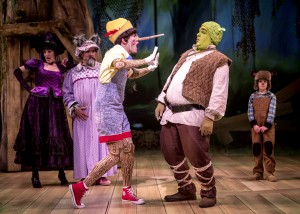 In the summer, while just about every other theater company is busy celebrating William Shakespeare, Chicago Shakespeare Theater, the bard’s local namesake, packs its Courtyard space full of excitable kids for a musical. It’s not just about the youngins though. For those adults who call theatergoing a hobby, Chicago Shakespeare’s family programming makes an ideal escape from the heat, not to mention from a citywide season of unusually sad and serious plays. Director Rachel Rockwell has helmed the past two CST Family productions, last year’s “Disney’s Beauty and The Beast” and now, “Shrek the Musical,” the storybook with layers.

While “Shrek” doesn’t glisten with the magic of the impeccable “Beauty and the Beast,” a production that made me seriously reconsider my admitted distaste for animated-film stories live onstage, this is still wonderfully smart and silly entertainment with merits all its own. But the musical is stunted by its inherent flaws. Unlike the usual Disney Princess fairytales, the thrill of DreamWorks’ 2001 “Shrek” film came not from the songs (Only one, “What’s Up Duloc,” is sung in the movie), but from its eccentric and intelligent script based on the 1990 children’s book by William Steig. It was a children’s movie that the real ogres, the critics, loved.

Well, Chicago Shakespeare’s production is only ninety minutes (about an hour shorter than the Broadway version), so composer Jeanine Tesori’s very catchy tunes now take precedence over David Lindsay-Abaire’s truncated book. That’s okay for the numbers that establish and grow ogre Shrek (Michael Aaron Lindner) and Princess Fiona’s (Summer Naomi Smart) relationship from detestation to adoration like the near-perfect “I Think I Got You Beat.” But so many of the songs value flash over substance and consequently subsidiary characters are demoted to sub-subsidiary. Basically the story feels somewhat thinner than it should, given the remarkable flesh of the source material.

The cast is high-spirited, and you can tell that participating in a production meant for children has made them take a special look at their characters. After all, cartoon cruelty on film is different from being mean in person. “Itchy and Scratchy,” right? Lindner’s Shrek wouldn’t hurt a fly, even though I’m sure there are plenty hovering around the smelly guy twenty-four/seven. Mike Myers’ ogre might not have been totally monstrous, but he surely had a temper. Any fear that Lindner inspires is purely prejudicial, reinforcing the musical’s message of acceptance: “Let your freak flag fly!” While sacrificing some of the sarcastic humor, which doesn’t much land with kids anyway, the cast keeps the darker, meaner moments light. The hilarious Travis Taylor plays Lord Farquaad, Princess Fiona’s suitor, as a dufus with a goofy grin plastered to his face, and James Earl Jones II gives Donkey a spring in his trot.

“Shrek” showcases some of the best Rockwell choreography I’ve seen, in part because she’s able to show off her awesome knack for physical humor and all things kitschy. So many of this production’s funniest morsels are contained in her dance and movement, and the broad physicality energetically establishes the strange world of Duloc. However, Mike Tutaj’s projections are actually a little too detailed, recalling a video game. His designs don’t gel with Scott Davis’ quickly morphing set, which begins with a look into yourself mirror and is framed by green angular boards. Theresa Ham’s costumes are a triumph of creativity; Pinocchio (Adam Fane) wears tights that are as much a rebellious fashion statement as they are pinewood lookalikes, and sitting atop Shrek’s head is a green knit hat that creates his ogre ears that resemble a cap a Bears fan might wear at Solider Field in frigid cold.

The reason that I go into this much detail about a harmless family production is that, in only a few seasons, Chicago Shakespeare has carved out an impressive niche as a producer of major musical revivals. A testament to that, Stephen Sondheim, who does not fly out to accept every award he receives, happily showed up to claim his trophy on Navy Pier in June. Rachel Rockwell’s fun “Shrek,” despite its shortcomings in both script and score, is a very funny and inexpensive (only $18-$25) afternoon for a family, not to mention a delightful production. And the kids won’t be the only ones giggling. (Johnny Oleksinski)