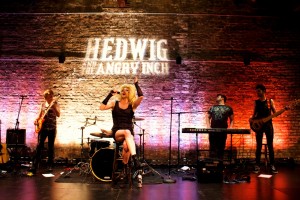 The glam-rock bio-concert, “Hedwig and The Angry Inch,” boasts a fervent cult following, to say the least. But the show about a transgender East German expat rocker inspires a different sort of fandom than, say, “Rocky Horror;” a fandom that carries with it certain pressures.

The audience at Theater Wit mouths the lyrics and hums with maybe a quarter the enthusiasm of a “Time Warp” sing-along, but all the while they scrutinize every joke and character mannerism. They don’t recognize the actors in front of them. The reason this musical is so beloved is that its writer and original star, John Cameron Mitchell, adapted the seventy-minute Off-Broadway show into a beloved film. So fans of the movie have to get over the fact that the shorter musical contains no realistic scenes, scenery or carbon copying; it’s all songs and banter in-between. The stage “Hedwig” is a purely theatrical experience and, frankly, I like that better.

Haven Theatre makes a splendid debut with this intimate, appropriately divey revival, and the results are enormously encouraging for a group that’s already committed itself to big endeavors. This brand-new company is slated to produce the musical version of “The Wedding Singer,” a big splash of a show, in the fall, so expectations for “Hedwig” were higher than they usually are for a storefront inauguration. Director Kyle Trent rises to the occasion, making propulsive, grungy use of the difficult Stage 3 at Theater Wit recalling the notoriously decadent performance art scene of New York’s Lower East Side in the 1970s and eighties. “Hedwig,” coming to Broadway next season with Neil Patrick Harris, is a musical that works far better in a nontraditional space, and Stage 3’s long platform gives Ryan Lanning plenty of room to strut.

Lanning makes a terrifically engaging, confident, feminine-but-abrasive Hedwig, who manages to conceal his age and convey a rich life, all while maintaining an air of whip-smart disarmament. His own sense of humor is just as much the character’s during natural off-the-cuff moments that blend seamlessly with the show. He interacts easily with the very sexy band, led by Kory Danielson, which blares its music loud and proud at late-night weekend shows.

At times, lyrics are difficult to hear over the supporting sound, but the environment’s vibe is more vital to the storytelling than clarion words with sharpened consonants. Daniel Friedman’s lighting design plays with colors so vibrant and alien that the world becomes a contorted barroom purgatory, where one imagines Hedwig and The Angry Inch will tell their story ad infinitum. A rollicking and hilarious evening, rarely are company debuts so explosive as Haven’s. (Johnny Oleksinski)