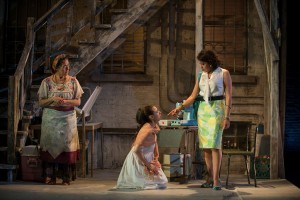 Last summer at Victory Gardens, the intense “Oedipus el Rey” uncovered parallels between King Oedipus’ dark road to blind incest and Los Angeles’ treacherous gang life. Not quite what you’d expect from Sophocles. What was really surprising though was how loudly Luis Alfaro’s play resonated in Chicago and expressed our city’s own urban problems—specifically the ritualist, tribal, patriarchal qualities of gangs that keep them thriving. I thought of that strange and terrible system earlier this year when it was reported that the CPS closings would force some students to cross rival gang lines to get to class. Gang lines?

Alongside Alfaro’s hard-hitting narrative was the contrastingly brutal and fanciful staging of Chay Yew, a director whose ability to craft a story with the human body is unmatched in Chicago. Back again at Victory Gardens, Alfaro’s “Mojada” is the playwright’s take on the story of “Medea,” the vengeful sorceress of morally questionable resolve (by today’s standards), set against a backdrop of faltering immigration policy in Chicago’s Pilsen neighborhood. Yew once again directs, and this new collaboration is every bit as thunderous as “Oedipus.”


In the twenty-first century, Medea (Sandra Delgado) sews women’s clothes and scarcely employs witchcraft as a hobby—maybe a curse, here and there—although the garments she weaves at her apartment are hailed by those in the barrio as “magical.” This play begins, like the Euripides, with a prologue from Medea’s nurse—here, her family servant, Tita (the exceptional Socorro Santiago, old-school and curmudgeonly, lighthearted and tragic)—describing in sound the history of Medea and Jason (Juan Francisco Villa), her husband. Tita waves banana leaves like they’re wings of a bird, and smashes them together over her head. Each time she does this, we hear a noise: people laughing, a man and woman having sex, a baby being born. But what follows is a departure from the usual Greek play. For one, Medea doesn’t scream so much. 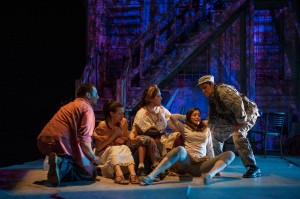 Alfaro includes some backstory. Quite ingeniously, the heroic journey of “Jason and The Argonauts” becomes a harrowing, frightening tale of crossing the border from Mexico into Arizona. Now, the Princess of Corinth for whom Jason leaves Medea is Armida (Sandra Marquez, capping off a remarkable season of performances), a wealthy Mexican contractor who employs Jason as a builder. Like the couple, she came from the state of Michoacán (they are from the city of Zamora), but she’s turned her back on her people and her history in favor of the American habit of self-preservation. This is where some openness comes in handy. Armida’s businesslike craving for not only Jason, but Medea’s child, Acan (Dylan M. Lainez and Ricky Reyes in alternation), is reminiscent of the telenovellas Tita loves so much. Her disposition also makes her a dead ringer for Joan Collins on “Dynasty.” So, you must willingly accept the inhuman largeness of her desires—capitalism doesn’t explain them adequately—and the very real dangers involved in undocumented migration, so sublimely expatiated by Alfaro.

Yu Shibigaki’s set is the backyard of a two floor splotchy white apartment building. All of the design’s color comes from David Hyman’s costumes and Liviu Pasare’s perfectly accentuating projections, which bring intense drama to the family’s journey to America.

Alfaro has a bold gift for entertainment. Outside of a few overlong scenes expected of any world premiere, “Mojada” drives with the speed and excitement of a Lamborghini like few other plays do. Plus, Yew’s production boasts one of the strongest combined casts of the season. But more profoundly, the playwright has re-birthed Medea as a completely sympathetic character. The Greek play, being wrought from an oral tradition and streamlined through centuries of translation and the excising of Greek drama’s fabled musicality, paints the sorceress as a pitiful, vengeful woman scorned. You rarely, if ever, feel for “Medea.” Actually, you’re scared of her. Criminy! She ends the play aboard a dragon chariot! Alfaro’s Medea, however, is a human being. While she also ends the play in flight, it’s in a manner that beautifully reflects this altogether new character.

Her plight as a displaced Mexican woman with a cloudy past hits home, thanks in part to Delgado’s shockingly reserved, respectful performance. The author is keenly aware that, in this day and age, what you keep to yourself is always more troubling than what you reveal. What Medea gives away only in snippets to her friends Josefina (Charin Alvarez) and Tita is that she’s at war in her new house. This shy woman feels unwanted and neglected by her community, by her family. She undertook a dangerous road from her homeland only to be alienated and compromised upon arrival. Isn’t that the story of modern immigration?

While the issue of immigration continues to take the spotlight of the national stage, plays like “Mojada” and “Home/Land” by Albany Park Theater Project are necessary reminders of the importance of theater: a larger-than-life medium that appreciates that our struggles, our fears, our insecurities, our longings, our wants and our needs are larger-than-life too. (Johnny Oleksinski)