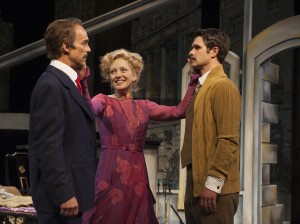 Though it’s best known as an outdoor Shakespeare venue of growing national renown, American Players Theatre runs a fair bit of work of more recent vintage as well. One of its specialties is the comedy of manners, often a revival of a somewhat forgotten work by a major author, such as last season’s delightful J.M. Barrie play, “The Admirable Crichton.” This season it’s W. Somerset Maugham’s “Too Many Husbands” (originally entitled “Home and Beauty”) a farcical late World War I sendup of marriage and, surprisingly given its 1919 London origins, excessive patriotism. In the hands of APT’s producing artistic director David Frank, the show crackles with humor; even the unnecessary third act entertains while it accomplishes little in the way of story or resolution. Marcus Truschinski, James Ridge and Jonathan Smoots all deliver in their roles as the trio of would-be/would-not-be husbands to Deborah Staples’ Victoria. Staples manages to make her vapid character a real charm, and in doing so, helps turn this creaky but witty script into a lovely little distraction from the heavy “Hamlet” that shares its stage. (Brian Hieggelke)

Up the Hill at American Players Theatre, Spring Green, Wisconsin. Through September 14. americanplayers.org