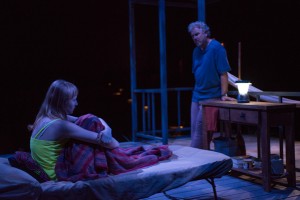 When does a wrongdoing become the past?

More narrowly, how long does it take for a wrongdoing to transition into a mistake? Is the difference between a mistake and an accident an argument of semantics or a protective distinction? Greg Pierce’s “Slowgirl” at Steppenwolf Theatre puts two extreme mistake-makers, and very different people, together in the Costa Rican jungle: a seventeen-year-old girl named Becky (Rae Gray) and her awkward uncle (and godfather), Sterling (William Petersen).


Back home in Massachusetts, Becky is involved, either directly or indirectly, in a terrible prank. She and a group of friends invited a possibly mentally disabled classmate named Marybeth to a house party, stood idly by while the girl had too many Jello shots, and then, as a game, they adhered fake wings to Marybeth’s arms. Pretending she could fly, the victimized girl jumped out of a bedroom window in an attempt to dive into the pool, but instead landed on the unforgiving concrete. Becky denies a major part in the tragedy, but she speaks about Marybeth ignorantly, selfishly and ambivalently nonetheless. At play’s start, Marybeth is in critical condition while Becky is visiting her expat uncle in Costa Rica, nine hours from the nearest airport.

Many years prior, Sterling was a lawyer and, he’ll tell you, not a moneyman. He noticed that cash was gushing into the firm, but not being a mathematician, he opted to ignore it and reap the benefits. To Becky, he spouts off legal mumbo-jumbo about the case reminiscent of the Enron scandal’s twenty-four-hour news cycle. As a result of whatever it is he did, Sterling lost his business and his job, and was forever labeled a crook. Before settling in Costa Rica, he followed his ex-girlfriend through California for two years—a kind of “black hole”—and then made camp in the Central American jungle. Today, he meditates daily in a labyrinth, a maze of lines he walks silently, reads and drinks smoothies. He has a friend named Hector that we never meet.

Although Pierce has a blunt pen for dialogue—particularly his very apparent detachment from the mind of a teenage girl—the playwright is as eloquent as can be when it comes to theme. Putting a middle-aged man and a teenage girl together in desolation activates a stigma in our culture that stands firmly against such interactions, even among relatives. The pairing creates an immediate tension, and a seeming opposition of life experience. Director Randall Arney deftly amps up the duo’s differences only to shatter them by play’s end.

Petersen and Gray’s characters clash in that around-the-dinner-table way in which every jibe, no matter how cruel, is ultimately loving. And that’s how “Slowgirl” earns its depth. Behind every horrible, ignorant thing Gray’s Becky spews out willy-nilly, there is an inherent goodness to her that is astoundingly endearing. Even as the disturbing party story continues to unravel, we never let go of Becky’s hand.

Petersen’s performance is consistently warm and dweebish, though it’s the warmth of a man concealing a temper, like when you find out your yoga teacher used to be an investment banker. It’s much easier for us to care for Sterling. Society has begun to accept that there are all kinds of incarcerations and penance that exist beyond jails and churches. Whether Sterling is actually at peace or not—I don’t think Petersen’s Sterling is, at all—he’s served his time. But Becky’s crime is in the present and, accident or not, involves the potential loss of a life. So, is she more villainous than her uncle? Are either of them bad people?

That’s the wonderful contrast of “Slowgirl.” Despite Pierce’s oft effortful reaching at edginess, it succeeds as a play of contemplation. Over the course of a brisk ninety minutes, you wonder if we’re too hard on our fellow human beings who make lapses of judgment, just like our own. And then, in an instant, as we laugh at one of Becky’s quips, the little devil hops onto our collective shoulder. Am I being hard enough on her? Pierce understands life’s unsolvable complexities, and Steppenwolf’s reverent, but far-from-safe production understands them even better. (Johnny Oleksinski)