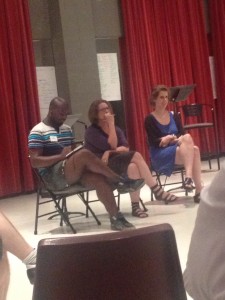 Play readings are pretty commonplace events. Theater companies put them up to try a dusty old script on for size or to aid in developing a resident playwright’s work for a later season. Groups like Chicago Dramatists will often host readings of their residents and students’ plays for an audience since public presentations are a helpful way for the playwright to hear the words anew. There certainly are plenteous readings to attend in Chicago, but you don’t often see readings with such full houses like I saw in the Goodman Theatre’s Healy Rehearsal Room last weekend. All of those chatty people packing in that meticulously clean, red-curtained space are proof of the caliber of talent involved with their Playwrights Unit, now in its third year.

Since September, the four-person group has met twice a month to discuss, hone and craft a play they each wrote for this artistic experience. This “unit,” created by the Goodman to nourish commissioned Chicago playwriting talent, includes Ike Holter (resident writer with The Inconvenience), Greg Allen (Founding director of The Neo-Futurists), Alice Austen (Chicago Dramatists resident playwright) and Christopher Oscar Peña (Lark Play Development Center’s 2012 Van Lier Fellow). Twice a month for ten months might not seem like much, but the meetings offer valuable insight as they each embark on their unique processes. Plus, these guys have bonkers schedules.

Peña jets back and forth from New York, the other city he calls home, while a production of his play, “a cautionary tale,” is in rehearsals at the Flea Theater (it closed on July 23 after an extension). Similarly, when I ran into Ike Holter at the group’s midterm readings in February at Chicago Dramatists, he was quickly visiting for the day, on break from rehearsals of “Hit The Wall” at Off-Broadway’s Barrow Street Theatre. And the final reading of the series, Alice Austen’s “Ninth Man Out” isn’t until August 16 because the playwright had to devote some time in July to a developing film project.

Past participants have included such vital city figures as Philip Dawkins, Seth Bockley, Lisa Dillman and Martín Zimmerman. Austen says that Tanya Palmer, the Goodman’s director of new play development, noted that this bunch of writers puts greater emphasis on the clinical side of the work rather than the emotional, which is the opposite of previous groups. That tidbit is unsurprising to me. During a talkback on Sunday night, Holter takes down notes from persnickety audience members about his script like it’s the advice of an advisory board—never defensive, always interested and attentive.

On hand at each of the three July readings—Holter’s “Prowess,” Allen’s “Sleeping with the Prince of Darkness: The Imagined Pillow Talk of FBI Agent John O’Neill” and Peña’s “F(law)less”—were artistic director Robert Falls, balancing his chair on its two back legs, and casting director Adam Belcuore among other Goodman artistic associates like director Chuck Smith, showing tremendous organizational support. By the way, gathering the space, time, actors and copies for a reading is really hard work. Thankfully it’s all been provided for them, and these readings are stacked with local talent. Directors include Henry Godinez, Henry Wishcamper, Marti Lyons and Wendy C. Goldberg, and actors like Adam Poss, Kristina Valada-Viars, Steve Pickering, Lisandra Tena and Josh Salt. It’s obviously improper to review a script in development, but let me tell ya, in the grand scheme of readings, these were all nail-biters.

Something that caught my eye while researching the Playwrights Unit is the role “director of new play development.” In name, that’s a pretty new player in Chicago’s theater scene. At most places, you’re still more likely to find literary managers. And intriguingly, it’s a role that has been popping up at many companies in the past two years. Three weeks ago, Steppenwolf promoted its literary manager Aaron Carter (formerly of Victory Gardens) to the same-titled position, and Victory Gardens brought on Geoffrey Jackson Scott as its director of new play development when Chay Yew took over as artistic director in 2011. Could these simple titular amendments signify a renewed dedication to Chicago-based plays and playwrights? I sure hope so, because, as is evidenced by these fascinating playwrights, the talent pool is deep.

The final reading of Alice Austen’s “Ninth Man Out,” is on August 16. For tickets, visit GoodmanTheatre.org.