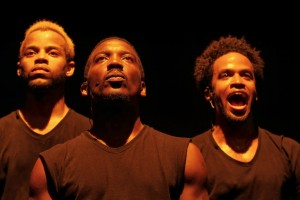 This publication has categorized performances by Marc Bamuthi Joseph (this is the third I’ve had the pleasure to preview) as “dance.” Bamuthi Joseph is a dancer and movement is always a strong element in his plays, but he is equally a poet, storyteller, singer and composer who weaves these elements together to pose and repose the fundamental question, “who am I?” In his one-man show “the break/s,” the question was framed by hip-hop music—an art form born around the same time as Bamuthi Joseph and a culture that shaped his identity. In “red, black and GREEN,” it is explored through community and the environments they engender. This time, the question is worked through as an address to an unborn child, with all the uncertainty, fear, pride and tenderness of a single father. Relationships between father and son, woman and man are explored through now-popping, now-silky spoken word honestly and unapologetically. Bamuthi Joseph originally performed “Word Becomes Flesh” as a solo in 2003. This revival has been dynamically restaged for six men from The Living Word Project in San Francisco. (Sharon Hoyer)