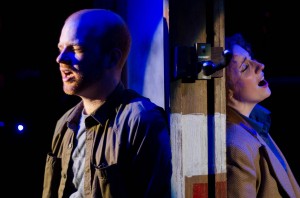 “Sittin’ in a room,” goes the chorus of the opening song of “Rooms: a rock romance,” receiving its Chicago premiere by Broken Nose Theatre. Awfully vague, don’t you think? From Anton Chekhov to Neil Simon, the theater involves a lot of sitting around in a lot of rooms. So, how does lounging on the sofa specifically connect to this love story? It doesn’t really. The lyrics of the first number generically present our life’s journey as a series of interconnected enclosures, from Scotland to London to New York City.

Monica (Hillary Marren) and Ian (Matthew Deitchman) are aspiring musicians still living with their parents in Glasgow circa 1977. They’re not particularly punky or rebellious; they’re, well, suburban, and swept away by the long-forgotten allure of New Wave music. The upbeat would-be lovers meet in song, and from there it’s a ninety-minute concert whirlwind of Bat Mitzvahs, bars and song contests eventually granting the band a kind of downtown notoriety that never rings true.

Paul Scott Goodman’s score is a familiar marriage of the genre-at-hand (New Wave) and schmaltzy show music, making a milquetoast compromise. The show includes only the two aforementioned actors and an onstage band. But the biggest issue facing director Benjamin Brownson’s production is that all these many concerts look, sound and feel exactly the same. The montage of songs whisks Monica and Ian on a wholly implausible journey, so the steps must be big, stark and diverse. A moment comes when we find out these two phonies somehow have the number-one single on the charts. However, from the looks of it they still live in the same crummy apartment and don’t know anyone else in New York. That’s the silliest aspect of this show: that these two can go so far with hardly a sacrifice to call their own until the final ten minutes when some much too heavy complications are shoved in for good measure.

Kitty-corner to the fame-and-fortune plot are Ian’s addictions and Monica’s unexpected pregnancy. He can’t escape the allure of his bottomless metal hip-flask and she finds herself in a scary circumstance where she doesn’t feel she can have a baby. No matter the production—Marren and Deitchman both have an undeniable genuineness—this musical does not have the sustained depth to warrant a serious number being sung inside of an abortion clinic or at an Alcoholics Anonymous meeting. There are fun, not entrancing, experiences to be had in “Rooms,” but it’s ultimately a fluff piece. (Johnny Oleksinski)