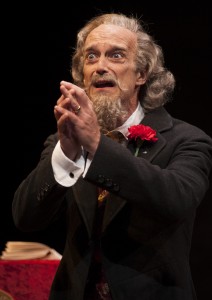 Two sides of “Dickens in America” at American Players Theatre are very much at odds with one another. At one is an edutainment script fit for a literature-class trip. Although imparting undeniably interesting personal tidbits reflected in his writing, Charles Dickens’ segues between his novel readings have the robotic blurbiness of Disney’s Hall of Presidents. At the other end is a remarkably endearing performance by James Ridge that, while perhaps too uppity for a figure from a more constricted time, is living and fully transformative. He takes all of the Victorian drear out of the King of Victorian Drear.

James DeVita’s slightly overlong new play harkens back to actual public readings the author once gave throughout the United States—a strange and surreal concept for the guy who is the quintessence of Britishness. The goateed Dickens performed passages from his works and sprinkled in his own off-the-cuff political and social murmurs, occasionally causing some uproar among the audience. DeVita’s fictional premise—Dickens’ final reading being given in Spring Green—is an exciting one. Even now, you don’t run into very many ticketed public readings—I’m talking in a theater; not the back of a bookstore—because it requires those shut-in authors to be extroverted. Two authors who jump to mind who can fill a room today are David Sedaris and, unfortunately, Glenn Beck. That Dickens not only gave public readings 150 years ago, but went on a transcontinental tour of them speaks volumes about his intellect and social joie de vivre.

That’s what’s best about “Dickens in America.” The actual Dickens text is read with the utmost panache by Ridge. DeVita has included an eclectic mix of lesser-known works from “The Posthumous Papers of the Pickwick Club” and the somewhat more recognizable “Hard Times,” to classics like “David Copperfield,” “Oliver Twist” and, of course, “A Christmas Carol.” Being so inundated by Dickens dramatizations as the theater is, it’s refreshing to become reacquainted with the author’s words as he wrote them rather than interpreted by Lionel Bart or any number of “A Christmas Carol” hangers-on. In a flurry of Yuletide nostalgia, we often forget just how funny Charles Dickens can be. DeVita’s play ends with a moving parable that encompasses the author’s (and our) entire life. It’s a lovely end, but the road leading up to it is yet a little stuffy. (Johnny Oleksinski)