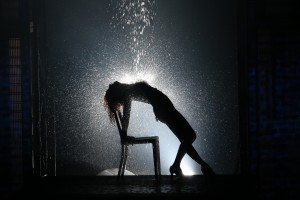 Taking a pop-culture film phenomenon and transforming it into a new Broadway musical is no easy task, to be sure: the myriads of misfires significantly outweigh the occasional hits. The latest to come down the pike in a pre-Broadway engagement is “Flashdance – the Musical, ” based on the 1983 film.

Known for his imaginative choreography, Sergio Trujillo takes on the director mantle for this production as well, with disappointing results. Perhaps seeking to recreate iconic dance moments from a film which made use of a dance double for its female lead—and for its solo dance finale, a breakdancing and gymnastics double as well—was destined to be a letdown live; perhaps a dance vocabulary of its own is the missing link needed for this show to come to life. Certainly if anyone could provide that, it would be Trujillo.

With a relatively small, generic and androgynous dance chorus, the dance element of the show feels forced and infrequent and rarely seems to have, well, flash. When the dancing stops for long stretches, things become painfully static, made much more so by the presence of constant power ballads newly composed for the show which not only serve to grind the action to a halt, but make a stark stylistic contrast to the upbeat dance songs from the film.

This is a hard-working cast, to be sure, but the material they have to work with seems very much still at an initial workshop stage. What was a fairly streamlined film has been padded up with additional characters, scenarios and songs that make this a long evening—indeed, seemingly epic—given how superficial the character development is and how uninvested we, the audience, are in what happens to them as a result. 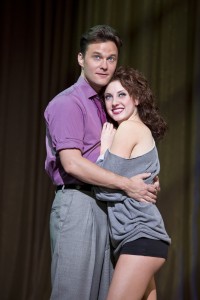 Jillian Mueller is certainly charming and appealing as Alex, and dances and sings well, but is ultimately unconvincing as someone with a dream to dance or as one in love. Her love interest Nick Hurley (Matthew Hydzik) is fairly vacuous, his principal asset that he can belt out a cumbersome tune in the most unlikely situations. I lost track of how many sappy duets the two had in the show; they piled up one after the other. When they weren’t singing duets, other characters in the show were having them. And yet, when a sung soliloquy was needed, other characters mysteriously faded into the woodwork (actually, steelwork in this case) at the oddest moments.

Within seconds of learning of a death, for instance, before she reacts or mourns, Alex narcissistically starts to sing about what is to become of her own goals and dreams. When Alex discovers that Nick has paved the way for her to have a dance audition, he starts to sing about his own feelings while she evaporates.

Too little dance for a dance show, too few spoken lines for a play, too many songs, even for a musical, this remains a show in search of a genre. (Dennis Polkow)