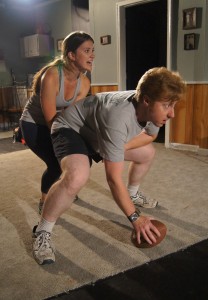 There’s nothing wrong with living a driven, goal-centered life, unless the people in your life don’t share your goals. Julia Brownell offers a compelling look at a family that not only fails to function on the same page, they’re all over the book.

Super Bowl-winning quarterback Mike (Andrew J. Pond) is floundering post-football; he’s written the memoir and the speaking engagements are drying up. He turns to athletic daughter Katie (Bryce Gangel) for dream fulfillment; if Mike gets his way, she’ll be the first female drafted in the NFL. Katie begins to think twice after a move to a high-school-football powerhouse; the game seems less fun and a successful future appears less likely. Mike harangues wife Beth (Kimberly Logan) to forget her nascent real estate career and have a third child and ignores wise-cracking black sheep son Aaron (Matt Edmonds).

Brownell’s ear for dialogue and eye for well-placed conflict successfully drive the story; each character has a well-developed thread. Some scenes drag as points are reiterated, but what family doesn’t wash and re-wash its dirty laundry? Scott Weinstein’s direction stays on top of the show’s pacing but his extremely horizontal staging comes with some poor sight-lines; some of the action is missed.

The performances support the well-drawn script; Pond plays a likable but tactless doofus who is blind to his plan’s negative impact; Logan’s patience is appropriately withdrawn when it counts. Gangel captures her character’s confusion; a sport that starts as a fun father-daughter activity becomes a burden she can’t shed. Edmonds is a stand-out here; his character’s efforts to be an anti-alpha are both comic and pathetic, but like the rest of his family, he’s smart enough to refuse to take one for the team. (Lisa Buscani)