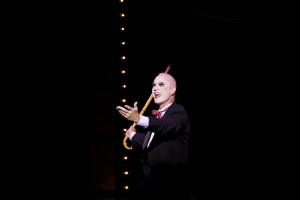 Before Rudy Hogenmiller became the artistic director of Light Opera Works in 2005, he had been a song-and-dance man on stage for more than thirty years. One of the shows that Hogenmiller danced as a young man was “Cabaret, ” and he admits that as an ensemble member, the Emcee role was one that he coveted.

Making his Light Opera Works performing debut by taking on the role decades later, Hogenmiller wisely decided to leave aside his usual directorial and choreography duties to someone else and brought in his friend and colleague Stacey Flaster, who directed the company’s memorable 2010 “Carousel.”

Leaving aside that Hogenmiller is more of a dancer than a singer and is severely stretching a trend that began with Joel Grey reprising the role he had originated as a young man as a much older performer in a revival, Hogenmiller certainly places his own unique stamp on the role. This is a humorless, diabolical emcee who reflects, rather than deflects, the decrepitude surrounding the pre-Nazi 1930 Berlin cabaret that is the show’s setting.

It is not a performance that will be to everyone’s taste, but if you can’t fulfill an old pipe dream in a company where you are the artistic director, where else? The crowd used to seeing Hogenmiller boost subscriptions before shows was certainly enthusiastically supportive of his performance from the opening moments to his final curtain call. 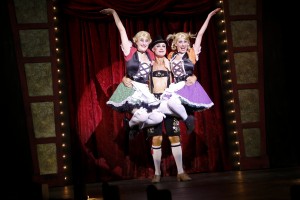 It was Hogenmiller’s desire that this be the original 1966 version of the show, which means that songs written for the 1972 film version are not heard. Movie numbers written for Liza Minnelli such as “Mein Herr” and “Maybe This Time” have become common in later stage versions despite the fact that they make the character of Sally Bowles larger than life. Refreshingly, Jenny Lamb plays Sally as an ordinary girl with lots of dreams who wears her heart on her sleeve. In its original form, the show makes clear that none of Sally’s dreams are even in the ballpark of reality, and that ideal is welcomely restored here. Sally’s original—and these days, rarely performed—opener “Don’t Tell Mama” is heard, which restores the show’s climactic title number to Sally’s biggest moment.

Also restored is the emphasis on the show being a true ensemble piece, Sally’s love interest Cliff (David Schlumpf) being a leading man with a bona fide tenor voice and the two of them expressing their feelings musically. The elderly couple (Barbara Clear and Jim Heatherly) have their own songs, and they are done up charmingly.

Nonetheless, the principal appeal of this production is the luxurious opportunity to hear the original score with its original orchestrations, something that doesn’t even happen on Broadway these days. That means not only a full pit orchestra, but a four-piece onstage all-female cabaret band as well. Even the little touches of accordion and banjo are included.

It also means that the chorus is made up of trained voices, allowing for the show’s folk song “Tomorrow Belongs to Me” to be heard as intended, a beautiful folk-song vocal arrangement, making its haunting use in the finale of the piece all the more disturbing and effective. (Dennis Polkow)