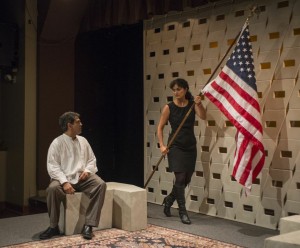 The carefully executed and evocative opening scene, a brilliantly subtle little bait-and-switch, promisingly sets “Invasion!” up to be an ever-shifting piece of all-engaging theater, asking its audience to stay on their toes and take nothing for granted.

Unfortunately, this production of Jonas Hassen Khemiri’s script (translated from the original Swedish by Rachel Willson-Broyles and adapted here with references to Chicago) quickly devolves into a rather confusing mixture of monologues and vignettes, only reaching similar heights of expression in its final dramatic moments. These two impressive bookends—one startling, the other soberly grounded—point to what this production, with its tongue-in-cheek, exclamatory title, might have been.

Loosely tied together by one ephemeral word (“Abulkasem”), Khemiri’s script seeks to examine how a simple word can effortlessly manifest itself into any number of meanings merely by passing through the filter of various psyches. During the course of this eighty-minute ensemble production, Abulkasem goes from a name in a stilted period drama to an adjective used by high-school students to describe almost anything (good or bad) to the name of a shadowy figure authorities are constantly hunting.

“Maybe Abulkasem is me,” one ensemble member says at one point, before turning the concept onto the audience, “Maybe Abulkasem is you.” In the same way that “Invasion!” can be uniquely understood by each audience member based on their own experiences, Abulkasem is up for interpretation. 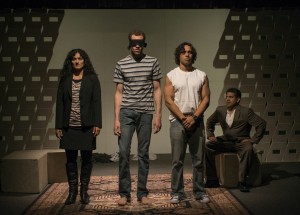 It’s a suggestive concept and set designer Dan Stratton’s multipurpose set pieces work well in this environment, moving, turning and even splitting apart to maintain the transitory feeling the show invokes. Try as you might, you can’t nail Abulkasem down and the dialogue snaps and scenes change to keep you from nailing the show down either. Still, despite the efforts of this capable ensemble, the majority of the bits here fail to make an impression. A young man in a bar takes the name Abulkasem to help his confidence when flirting. A young woman substitutes Abulkasem when she can’t remember the name of a Middle Eastern director. And a panel of “experts” frantically blame Abulkasem for everything from increased gun violence to Snowpocalypse. Yes, the meaning of Abulkasem fluctuates wildly, but that point has already been established.

However, there is a darkly comedic scene in the middle of the show that stands apart. In it, a desperate immigrant seeks an interpreter to help him tell his full story in his own language. And as we slowly become aware that the interpreter may not be giving us the whole truth, the nature of psychological filters and what we choose to believe becomes readily apparent.

Despite its relatively short running time, Silk Road Rising’s “Invasion!” begins to drag. Director Anna C. Bahow would do well to pick up the pacing—the faster these ideas come at an audience, the faster they are asked to respond and interpret what they are seeing. Since much of the script revolves around turning those judgments on their head, the faster we get turned around the more likely we are to recognize our own biases. And the faster and more startling the bulk of the show is, the more intense the gut-punch of the intensely dramatic finale. (Zach Freeman)