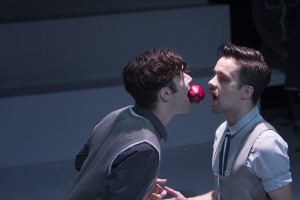 In the field of Computer Science, when you’re studying algorithms and network connections and artificial intelligence, there are a few actual human names that get committed to memory along with all the bits and bytes. Charles Babbage, the nineteenth-century inventor of the difference engine and “father of the computer”; Gordon Moore, he of the incredibly prescient Moore’s Law; Grace Hopper, a programmer who coined the term “debugging” after she removed an actual moth from inside a computer, and Alan Turing, creator of the Turing machine (the precursor to a programmable computer) and the Turing test (an imitation test used to see if a machine can at least appear to be human).

Considered by many to be the father of computer science, you almost can’t learn about programming without learning about Alan Turing. But for the layperson, here’s a small way to remember him in your day-to-day computer usage: you know those annoying little scrambled letters that you have to perfectly reproduce when you want to submit a form on certain webpages? That’s called CAPTCHA, which stands for Completely Automatic Public Turing test to Tell Computers and Humans Apart. It’s a reverse Turing test—asking you to prove that you’re not a machine, rather than vice versa.

But enough computer science. The opening words of playwright Alex Paul Young’s moving new production (first performed at last year’s Chicago Fringe Festival) dispose of this sort of dry information dissemination immediately: “If you think this is going to be a history lesson, you’ve come to the wrong place.” Though this may be the story of the life of Alan Turing, and though we are told that we “will know Alan by the end of this,” “Pink Milk” is also an extremely interpretive, sometimes abstract and always captivating version of Turing’s life.

The young, athletic cast members consistently deliver powerful performances, both acting and movement-wise. Centering around the youthful (and possibly homosexual) relationship between Alan (Aaron Stephenson) and Christopher Morcom (Cole Doman), Young’s version of Turing’s life feels both historical and contemporary, revealing pockets of Alan’s life (his genius, ostracism and personal struggles) while maintaining a connection to the universal human condition of love, loss and loneliness. Throughout Turing makes and maintains emotional connections not only with his mother (Caitlin Collins) and father (Charlie Kolarich), but with various Inanimate Objects (given surprising depth by Carrie Drapac) and his numerous robotic creations (Darren Barrere). 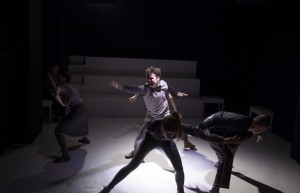 Though Turing’s mathematical acumen was put to great use during World War II, he’s portrayed here as a poetic dreamer, a man-boy who only wants to watch “Snow White and the Seven Dwarfs” and create a robot that can “write a melody about how a daisy smells.” His teachers and other authority figures (mostly portrayed by the commanding Jessica Dean Turner) demand not beauty but violence, action and efficiency from his creations. This dichotomy serves well to examine the strained relationship between the British government and the historical Turing, a man whose work on deciphering German codes undoubtedly helped win the war but who was later arrested and charged with “indecency” due to anti-homosexuality laws.

A strictly historical account of the life of Alan Turing would indeed be a worthwhile endeavor. There’s certainly plenty of intrigue, genius and historically relevant moments to captivate an audience. But Alex Paul Young’s interpretation instills more beauty, hope and wonder into Turing’s life than a historian could muster. Also, and most importantly, it passes a reverse Turing test with flying colors. A production like this could not have been created using purely mechanical means. (Zach Freeman)