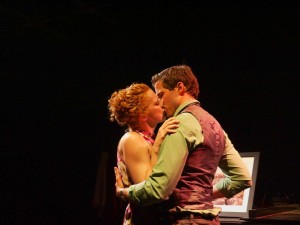 Jason Robert Brown’s well-crafted two-person musical “The Last Five Years” (actually more of a mash-up of two one-person musicals) tells a fairly uncomplicated story of a relationship and its dissolution. Through a series of solo songs, Jamie (Jim DeSelm) and Cathy (Allison Hendrix) each give us their perspective on their marriage and divorce, but they do so in different timelines. Jamie is going forward from when he first meets Cathy while Cathy is going backwards from their divorce. The parallel timelines converge only once, when Jamie asks Cathy to marry him and they sing together.

In director John D. Glover’s thoughtful staging, each performer accompanies the others’ singing by playing piano. This device has the effect of showing the two characters’ tenuous connection fighting to survive, despite the fact that we hardly ever see them “together.” The songs are great both musically and lyrically and both performers boast stellar voices. The minimal staging makes it clear that we’re spending the evening inside these two characters’ heads and hearts.

When we first meet Jamie, he’s a twenty-three year old literary wunderkind about to publish his first novel. He might fit the stereotype of the nebbishy Jewish writer/intellectual were he not played with such confidence by the classically handsome and charismatic DeSelm. When he meets Cathy he sings a song of praise to his “Shiksa Goddess,” with whom he’s madly in love. In Cathy’s reverse timeline, we see things are not so happy. Jamie is now the toast of the New York literary establishment at twenty-eight but she is unhappy because her own career, as an aspiring Broadway actress, is stalling. The gap in their professional accomplishments quickly leads to a strained marriage, compounded by Jamie’s wandering eye. 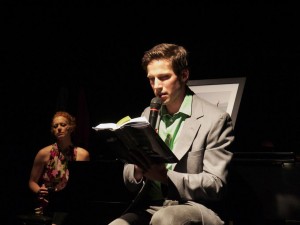 Jamie’s life is so comically charmed, and Cathy’s so fraught with disappointment, that the latter gets the lion’s share of our sympathy. In addition to her fine musicality (which she shares with DeSelm) Hendrix brings a wonderful warmth and self-deprecating humor to Cathy. Particularly fun are the moments we see Cathy going on auditions and realize that Cathy the character is not nearly as talented a singer as Hendrix the performer.

Jamie isn’t necessarily a bad person, but he’s certainly a narcissistic one, and the ninety-minute show never really gives him any opportunities for growth or to confront his flaws. Nonetheless, this show isn’t particularly interested in placing blame. It has compassion for both of its protagonists, and validates both of their feelings with humor and sympathy.

There’s nothing extraordinarily insightful about this love story gone wrong. It all seems very familiar and somewhat navel gazing. But that familiarity is this simple story’s strength. Anyone who has loved and lost—which is approximately everyone—can relate to the emotions that are tenderly explored in “The Last Five Years.” (Rory Leahy)