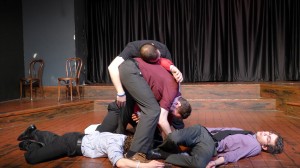 Switch Committee—David Schwartzbaum, Ryan Nallen, Alan Linic, Dave Karasik and Collin Dahlgren, best friends and iO Chicago graduates—perform their own version of the venerated improv form, the living room, by starting with an honest conversation that organically evolves into a scene, leading audience members to call them a Cook County Social Club. Switch Committee recently secured a Thursday night show at iO with an open run, and have been performing with their friends Lethal Action Force Saturdays at midnight. After they opened for L.A.F., Newcity caught up with the boys of Switch Committee for a late-night interview.

Watching you guys it’s evident that you have incredible group mind, could you speak to that?

Ryan: I think it’s because we’re all friends, we’re all best friends. We’re around each other all the time.

Dave Karasik: A lot of what you see on stage is exactly us, just hanging out. It feels like it’s just a fun conversation in a living room, just messing around.

Collin: We’ve had times where there are five-person piles, and there’s no show, it’s just us having fun.

Alan Linic: Speaking to how intentional it is, I know when we were first starting out, we sat down and talked about what we wanted as a group and one of the things that kept coming up was the ability to do anything, and have the anything work. That feeling of “I could jump off a ledge and know that everyone’s going to be there to catch me.” It’s freeing, because it allows us to throw balls in the air, and know that something is going to happen with them.

How does Switch Committee develop that group mind?

Dave K: We all have so much fun, and everything with what Timmy has really ingrained in us with the hyper listening. It’s like we all are juggling, and we all want to catch at the same time.

David S: It’s almost like, the most playful one-upmanship: “Do you see how well I just listened there?”

Alan: Jeff Griggs coached us for a while as well; he called choices toys. If Collin makes a move, he has made this toy and is passing it out, and now we all get to play with this toy, and if anyone makes a move, then we can all make this move and pass out this toy, and by the end of the show the ground is just littered with toys that you can pick up at any time.

I’ve noticed that you compliment and acknowledge each other, and are very positive. Could you speak to the importance of positivity on having a good team and a good show?

David S: I honestly think if you were to break it down, it’s that positivity that allows us to do all the things that we’ve been talking about. Like if someone calls me out on a mistake, I immediately know that they are doing this for the betterment of me and the betterment of the show. I believe that our relationships and our positivity and our looove for each other…

Collin: Why don’t you make that word a little more labored.

David S.: Looooove… But I really do believe this shows itself in the shows that we do. If you boil it down it’s really the biggest thing with us. No matter what we do it’s all grounded in that.

Ryan: Positivity is key. You don’t want to be in a group where you walk in and everyone’s arguing.

What advice would you give to improvisers starting new teams in Chicago?

Collin: Get to know the people that you’re playing with. Know someone on a personal level, so that whenever you play with them there’s something you know about them that they would be good at.

David S.: As long as you trust that other people have your back…