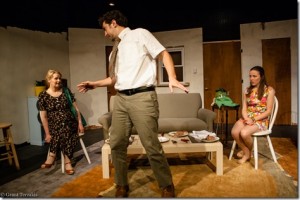 Benjamin Franklin once said “Guests, like fish, begin to smell after three days”; that’s the premise of Larry Shue’s critically panned but popularly acclaimed annoying-guest-comes-to-dinner farce. But this Black Fox remount is missing the energy and spark that took a very basic concept to London’s West End and Broadway.

Willum (Jason M. Hammond), a Vietnam vet, landlord and promising Terre Haute, Indiana architect, is in a bit of a rut. He doesn’t lack for work, but he doesn’t like the work he has. He is comforted by tenants Axel (Philip Aman), the local drama critic and Tansy (Jasmine Ryan), a love interest set to head to Washington DC in a week. Willum is visited by army buddy Rick Steadman (Guy Wicke) who saved Willum’s life in Vietnam and now proceeds to drive him crazy.

The script’s humor is hokey and square, and the upfront exposition is heavy-handed, but that’s not the problem here; the show is missing the door-slamming energy that farce requires. Hammond captures his character’s sad sack energy and appropriately drops it when required; Wicke’s wide-eyed, maddening naiveté is right on the money. Ryan’s perky enthusiasm and Aman’s sarcastic toss-offs work, but the ensemble’s timing seems tentative and slow. Director Mary Reynard claims to target the essence of the late seventies but the costume and audio design is out of the sixties. While this simple comedy is easy to access, it requires more of a motor behind it. (Lisa Buscani)