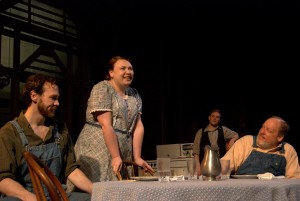 You’ll stand the forty-five-minute drive from the city. You’ll stand the insufferable traffic and overpriced tolls. You’ll even stand the thrumming engine roar of a low-flying aircraft as its hum is sucked down into the actor’s mics and out through the speakers. You’ll stand all of this, gladly, because the performances in “The Rainmaker” demand it of you. In Alison C. Vesely’s cozy revival of N. Richard Nash’s “The Rainmaker,” all the charm and Faulknerian hospitality that was present in the 1954 Broadway debut has stayed intact, though, unlike the Count’s more complicated works, Nash’s script tells the simple, fable-like tale of the Curry family—a clan of farmers living in rural Southwest America during the Great Depression. Played out over the course of a day, the story follows Lizzie Curry (Hayley L. Rice), a stubborn, self-loathing spinster whose father, H.C. (David Rice), and two brothers, Noah (Matthew Keffer) and Jimmy (Alex Weisman), are trying desperately to pawn her off to a suitable man for marriage. Meanwhile, a hellish drought has devastated their livestock. The cure to both problems seems to lie in an eccentric wanderer named Starbuck (Joseph Wycoff) who blows through town championing love and promising rain. The day begins with Lizzie’s return home from a nearby town, where she was unsuccessfully courted by a pack of male cousins. Upon hearing of their failure to marry her off, H.C., Noah and Jimmy—fatigued by the heat and lack of work—rush into town to invite the Sheriff’s Deputy, J.S. File (Aaron Christensen), to supper. He reluctantly declines, leaving room for the grandiose Starbuck to drop in on the Currys, peddling his divine rainmaking abilities… for the price of $100. What follows is a surprisingly heartfelt story of self-discovery and self-affirmation. Initially, Rice does a commendable job of convincing the audience that Lizzie should only be taken at face value. “I am a woman. A plain one,” she says.  This is true, but as the story progresses, her interactions with the rest of the cast prove her to be a dreamer. And while there are plenty of scenes throughout that become haltingly melodramatic, the cast does a wonderful job stringing a grounded line of truth that keeps the story moving. 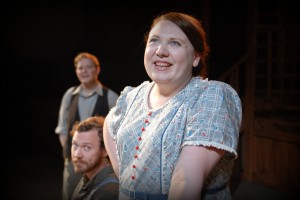 Weisman, however, steals the show. His innocence is pure, and his fervent projections are the products of an actor whose chief concern is the impressions of the words he’s speaking on the ones who are lucky enough to hear them. In a play built around the jib of the flamboyant conman Starbuck, Weisman brings a refreshing life to a smaller role. Before the performance, which is staged on the grounds of the Mayslake Peabody Estate, bluegrass tunes are cranked at top volume to set the mood. The seating is first-come, first-served, and having a case of cold beer, or a sweet wine with assorted cheeses, is preferred. As the lights dim, Vesely’s bold use of the outdoor stage environs the audience with an unpredictable sensory experience that gives Nash’s work an entirely new life, a life that is evident from the very first scene. From the mosquitoes zinging in your ears to the ripe smell of wet grass and pine, the production heightens the sense of southwestern romance; a subtle quality that makes this production a joy to watch. (Michael Anthony Adams)