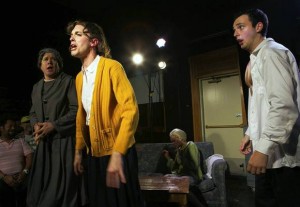 In August of 1998 Camille Paglia, social critic and dissident feminist, released an essayist’s interpretation of Alfred Hitchcock’s “The Birds” that cast the themes, love triangle and imminent aviary violence of the film in a Freudian light. Sexual tension, phallic imagery and psychoanalysis abound in Hell in a Handbag Productions’ remount of “The Birds,” illuminating the primal impulses at the heart of Evan Hunter’s script and Hitchcock’s direction of the original film. A stark light is also cast on Hitchcock’s advances toward Tippi Hedren throughout the filming, which serves as a centerpiece of the play.

Taking a cue from Paglia’s book, Handbag’s “The Birds” takes place on the set of the film inside Hedren’s mind (Hedren is played to affected perfection by Catherine McCafferty). It’s important to note that Hedren’s performance was a result of a severe lack of sleep and constant haranguing by Hitchcock himself. McCafferty plays this strange nuance well, while delivering the comedic elements of the script with excellent timing.

Paglia’s book makes an appearance in the play in the hand of Paglia herself (Margo Chervony) for a gag about social commentary commenting on social commentary, creating a loop of mirth as Paglia continues as a spiritual guide for the audience. If all of this sounds a bit too heady for a meta-comedy romp about an arguably campy movie where birds attack unwitting socialites, don’t worry; Handbag’s “The Birds” is also damn funny.

Originally produced in 2001 under Sweetback Productions, Handbag’s “The Birds” is part love letter, part psychological deconstruction, and complete comedy, with welcome musical numbers keenly placed to build momentum. The play is anchored in the script and spirit of the original film, which is purposefully changed and often shattered completely for comic or emotional effect. And it is that comic and emotional effect generated by this hard working ensemble that elevates this play from good to riotous in a whirlwind of support that help the lead performances shine.

Chervony’s Paglia reflects the pressures of stardom when coupled with hilarious attacks by gulls and crows. The attacks themselves are expertly staged and, just as in the movie, walk the line between camp and actual horror. We are invited to believe that Hitchcock is orchestrating everything. Peggy Robertson, played with curt tenacity by Elizabeth Lesinski, says, “Mr. Hitchcock does the thinking for us, and he’s always right.” 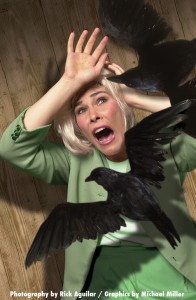 The staging of the play in The Coach House at Berger Park is used well, and never becomes the focus of the production. We’re invited by Robertson to take a step into the soundbooth “where the follow-up to ‘Psycho’” is being filmed. What is perhaps most effective about the technical design is how straightforward it is. Using the Coach House as is, with all the gear of a film set, provides clarity to a production that could otherwise have suffered from the weight of the play’s devices.

As Suzanne Pleshette/Annie Hayworth, co-director David Cerda is luxurious in a way only hinted at in the film. Serving as a foil to McCafferty’s Hedren, Cerda’s turn as Hayworth’s lounge singer with “The Woman at the End of the Road” provides one of the plays most entrancing moments: the lights are lowered and the audience is encouraged to yearn. Later in the play, Hayworth’s final bow provides one of the plays most phallic and unexpectedly hysterical moments.

As Jessica Tandy/Lydia Brenner (Mitch’s mother in the film), Ed Jones turns in a performance that is so distinctly motherly, it’s easy to forget that the character is being played by a man. Maternal, forceful and jealous, Jones’ Lydia is surprising and exciting to watch.

The play moves quickly, as does everyone in the cast, mostly serving as their own stage crew, rapidly moving from scene to scene. As a result of all of this velocity there are moments where the play’s cohesion begins to stutter, but this is mostly because there is so much to marvel at in terms of design, effects and sheer emotional force from the ensemble.

Some of the funniest moments deftly combine elements of representative imagery and sight gags, and the script is clever in ways that are both amusing and ludicrous. The high reference level and Paglia’s thesis combined with allusion to the lore of Hitchcock’s film will delight fanatics while still providing enough joy for those only casually acquainted with the film. In this way, Handbag’s “The Birds” is a multi-layered production. Greater knowledge of the film will open doors of insight and fun, while new initiates are still offered a very funny and complex view of Hedren’s plight, uniting the audience in both laughter and sympathy. (Joshua C. Robinson)