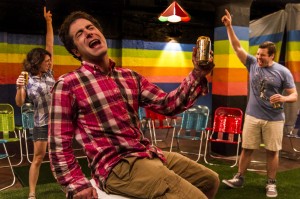 In his time, Shakespeare’s plays, particularly his comedies, were meant to entertain the masses. These early situational comedies (yes, sitcoms) were borderline interactive, with a small (all male) troupe playing multiple roles. The Hypocrites’ version of “Twelfth Night” (adapted and directed by Sean Graney and rechristened “12 Nights”) captures this ebullient Shakespearean spirit even as it strips down, modernizes and even mocks many of the original plot points.

Waiting in the lower lobby of the Chopin Theater, the audience is warmly greeted by the show’s energetic ensemble (Tien Doman, Christine Stulik, Zeke Sulkes and Jeff Trainor) before being ushered into a staging area that features free cookies, a disco ball, a chance to write on the walls with markers and some “great ’80s jams.” From this pre-show party those audience members with seats are invited to the actual set, a small section of astroturf surrounded by multi-colored lawn chairs, rainbow-striped walls and dangling air fresheners. The rest of the audience is then invited in to stand and watch from any available spot in the room.

“Thank you for spending your time and money on live theatre. I understand how valuable both are to you,” reads Graney’s director’s notes in the program. And this relatively democratic seating (or non-seating) arrangement instantly creates a laid-back atmosphere that allows the audience to comfortably invest themselves in around seventy minutes of consistently engaging (and often uproariously hilarious) theater.

The tightly knit cast, clad in hip street clothes, gather around a mini-fridge to clasp hands before bursting into the opening moments of the show. “If music be the food of love, play on!” declares Duke Orsino (Trainor) as he creates the umpteenth mixtape (featuring a live cover of “Total Eclipse of the Heart”) for his unrequited crush Lady Olivia (Stulik).

Whether it’s “Eternal Flame” or “Every Rose Has Its Thorn,” music is strongly featured throughout the show, with a prominently placed boombox blaring out recognizable tunes from various cassette tapes the cast (who also serve as designers for the show) burnish and play themselves.

From its opening moments, the cast’s enthusiasm is infectious. As the audience was filing in, an ensemble member told me (and another audience member wearing sandals) to take our shoes off and rub our bare feet on the astroturf because “it feels good.” This seems to be the general concept of the production: get comfortable and enjoy. As the show progresses, ensemble members are constantly dropping in and out of character, breaking the fourth wall to become part of the audience and enjoy the performance along with the rest of us. 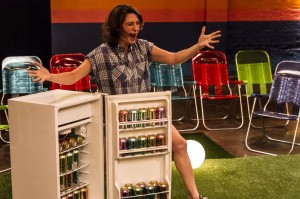 “This is Illyria, buddy,” declares Trainor to a newly rescued Viola (Sulkes). And this conversational style continues throughout the performance, providing something of a “welcome to Shakespeare” introduction to those who may be unfamiliar with the Bard’s words and a solid inside-joke style to the previously initiated. The Hypocrites’ most impressive feat here is pulling off a fully formed show that both honors the traditional Shakespeare and playfully mocks its silliest plot-points.

Audience members are constantly reminded that they are, in fact, attending a theatrical production, with cast members smiling at them, pointing to them and even asking one specially seated member to participate briefly. Still, by the time the show reaches its conclusion, it’s hard not to be fully invested in the plight of every character involved, even the woefully diabolical Malvolio (Doman). “Twelfth Night” may be a Christmas-centric show (referencing the twelve nights of Christmas) but “12 Nights” is a solidly entertaining summer production, merely asking that its audience take off their shoes, stop and smell the astroturf. (Zach Freeman)