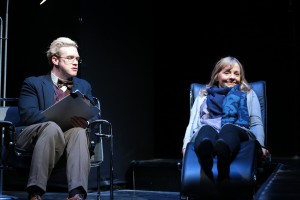 An architecturally surreal house is the setting: bedrooms, neon lights, a kitchen. As the center spotlight comes up, a beautiful middle-aged woman, with a hint of fatigue on her brow, sits at the kitchen table waiting for her son to come home. She sings that it is the seventh night in a row, sitting up and waiting. He comes in and she smiles. He’s a teenage jock. And his mother loves him. And as the familiar mother-son relationship unfolds, her “genius” teen daughter walks by. It is three o’clock in the morning. The daughter has been up and will remain so to study. The mother walks up the stairs for a roll in the hay with her husband. The frenetic energy of the nuclear family, the familiar chaos of a morning routine in any suburban home comes ahead like a bulldozer—it is easy to recognize. All seems right. But then this stunning, gifted mother at the center of this familiarity begins to make lunch sandwiches on the floor.

The family convenes, instantly recognizing the troubled patterns, and the audience is off to the darker corners of suburbia: tragedy, mental illness, addiction and existential dread permeate every song. All at once it is contemporary, painful and funny.

“Next to Normal,” an unusual combination of a musical combined with a serious drama about mental illness, is one of only eight musicals to win the Pulitzer Prize in drama. It’s something like a musical cross between “American Beauty” and TV’s “Modern Family.” Scored by Tom Kitt, with lyrics by Brian Yorkey, the soundtrack is mostly spot-on. Aside from a few small, uneven choices, such as the lovely but misplaced ballad “I Miss the Mountains,” a beat is rarely missed. Under the direction of Drury Lane artistic director William Osetek, Jeff Award-nominee Susie McMonagle handles the role of matriarch Diana Goodman (and all thirty-six songs that come with that role) with wonderful strength and tone. The entire cast executes this modern malaise with powerful vocals, well-structured movements and effortless panache. 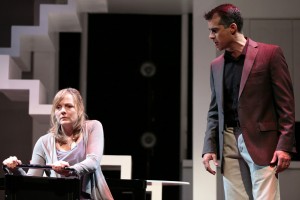 A leading theme throughout is the abuse of prescriptions by both patient and doctor and the opening-night audience at Drury Lane was almost in hysterics as the first psychologist, Dr. Fine (an impressive Colte Julian, who pulls double duty, appearing later as the more approachable, rock ‘n’ roll Dr. Madden) goes through a sixteen-week regiment of meds for depression with Diana. However, the true genius of the narrative is the misdirection of the story. Whereas all of these maladies are displayed as symptoms, what is the genesis of the problem? Did Diana and Dan (Rod Thomas) marry too early, causing her career to suffer as her roles of motherhood and wife took precedence? Or is the question even larger: can love be sustained? Can two people in love build a home and flourish? Or is the nuclear family doomed? And what of their daughter Natalie (Callie Johnson), who also seems to be falling in love at an early age? How is the illness-burdened mother to watch her own daughter—the rationalized reason for her own sacrifices—follow a parallel course? At each turn, the realities of the problem intensify.

“Next to Normal” is expertly woven, and excellent on pitch. It integrates realism, song and movement, with high-powered guitars as well as pianos and ballads, complete with an accomplished cast that is more than up to the task. This is a rare musical, one that fulfills its intent by putting the viewer in a story of unease wrapped in beauty. (Mark Roelof Eleveld)