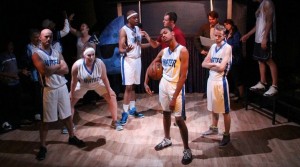 Once in a weird, waning moon, something very strange occurs. It comes on suddenly, like the regurgitation of a warm shot of whiskey, and wreaks tender-footed havoc on those willing to sit through its pageantry. This is “The Lockout: A Musical:” a preternatural comedy with the semblance of “Zoolander,” the lasciviousness of “Rocky Horror” and the wit of Charles Barkley’s half-baked commentaries.

Behind the surprisingly well-sung tunes, creators Ben Fort and Jason Gallagher tell the story of a fictional NBA team, the Wichita Water, and their idealist owner, Phil Goodman (Ben Harpe), as they struggle through the 2011 NBA lockout. After another losing season, Goodman needs to find an all-star, and he does so in a sappy bromance with overpaid, “zero-time all-star player” Macon Jones (Patrick Poulin). He also hires on Jess Belton (Sarah Lynn Robinson) as his general manager, a Paul DePodesta-like guru who has Goodman raving her statistical genius is “Moneyball!”

As the lockout drags on—marked by an onslaught of sixteen musical numbers heavily reliant on social media and pop culture references—so does “The Lockout.” With a runtime of nearly two-and-a-half hours, the show’s intermission begins to feel as stultified as the contract negotiations between David Stern, Billy Hunter and Derek Fischer.

“When our team isn’t the one in thirty that wins it all, we look at the owners, GMs, coaches or players, and call them dim-witted, selfish, greedy and stupid,” write Ben and Jason. “For ‘The Lockout: A Musical,’ we wanted to take these individuals and make them people like you and I.” And sure, if done correctly, this objective could be a truly great achievement—marrying the world of athletics with the world of theatrics—but instead we’re treated to a sideshow full of caricatures that I hope to Christ are nothing like me, or you, or him, or her. For example, there’s the Intern (Rachel Tietz), who’s learned nothing during her management internship with the Water, or Dan “Danimal” Reed (Taylor Okey), a washed-up Tracy McGrady-type who desperately wants to get back in the game, and a dozen more NBA paradigms that make “The Lockout” a self-indulgent nod to shallow sport humor.

Yet, with all of its flaws, what this production does have is voice. Ben Harpe gives an exceptionally strong vocal performance as Phil Goodman (one that may make the show worth seeing), as does the rest of the cast during the ensemble scenes. And though the songs may repeat themselves, the actors do a wonderful job of keeping the audience tuned in. Remember, it’s BYOB—the woolly, alcohol induced haze may even result in you enjoying yourself. (Michael Anthony Adams)