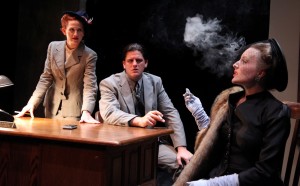 They say the pen is mightier than the sword, but in Babes with Blades Theatre Company’s premiere of Eric Simon’s “Bo Thomas and the Case of the Sky Pirates,” the two tools are nearly equally matched.

This word- and action-packed production pays homage to the 1940s detective genre, while gleefully pillaging all the significant noir tropes: hats, trench coats, cigarettes, the mysterious femme fatale, the fading detective agency, the scrappy and irrepressible heroine and the increasingly perplexing (and in this case, slightly fantastical) mystery. But in “Bo Thomas” the 1940’s gender roles are completely reversed.

Bo (company member Megan Schemmel), as gal Friday of the Sam Lowell detective agency, is quite clearly running the show while her boss, Sam (Mark Lancaster) is hopelessly feckless and inept. Why, the poor fool doesn’t even know how to shoot a gun: “You can hold it later,” Schemmel croons condescendingly.

Because the usual sexual frisson is completely absent here, one even starts to wonder what these two characters are doing together at all. But never mind that, this production is not pretending to be “Body Heat” and the intentional, situational subtext is more Annie Oakley, as in “Anything Sam can do, Bo Thomas can certainly do better…”

And how! As Bo Thomas, Schemmel completely dominates the show, presenting a crisp and winning performance and clearly enjoying herself along the way. But I found myself wishing she would just take off her hat and let down her hair far earlier than she actually does.

That jaunty hat, as a symbol of her supposedly secondary role at the agency, perches improbably on her head throughout the first several scenes, and she only removes it later, under combat duress. And this is perhaps the first lost opportunity: her hat, hair and costume could be prominently featured as part of Bo’s symbolic arsenal, as emblems of her female power. But here, the two symbols are ignored. 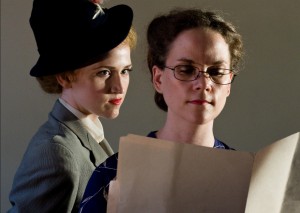 And if there is one problem with BWBTC’s brisk production, it is that it (perhaps unwittingly) pulls punches. For a company exploring women’s power through the vehicle of stage combat—violence and domination—they are merely scratching the surface and skittering along the top of the combat choreography without truly exploring the complex, and at times uncomfortable, dimensions of power.

Of course, this is a tricky and potentially explosive endeavor, but all the ingredients are already there in the script, in the combat and confinement (read bondage) scenarios. But rather than dig deeply into the ambiguity and volatility of sexual power, this production goes straight for the laughs. And I do mean straight.

When Sam is being restrained and questioned by the double-crossing Sally (Kelly Yacono), or worked over by the dominatrix-like Minerva (Maureen Yasko), we can start to see where these situations are heading, but this production chooses not to take us there. And this could have something to do with casting. Lancaster plays Sam as lovable and goofy, completely ignoring typical versions of noir masculinity. And what of the combat between Sally and Minerva? As two alpha females, scrapping for and ceding dominance, their scenes fairly bristle with unrealized innuendo. But, in the end, this production shies away from explicating or even exploring their relationship at all.

Still, while it might not pack the power of its true potential, there is plenty to like about “Bo Thomas and the Case of the Sky Pirates.” It’s light, breezy and everybody in the cast seems to be having a heck of a good time. And on the night I attended, the audience was positively bubbling over with raucous laughter. Furthermore, as this is a world premiere of Eric Simon’s script, perhaps in the future we can look forward to a more pointed interpretation.

The snap, crackle and pop of Eric Simon’s script and Michael Kunc’s original jazz score stand out, as does Schemmel as the irrepressible Bo, along with the strong, committed work of Yasko and Yacono. (Kaelyn Storme)