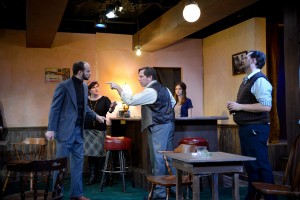 Rumor has it that the Irish cast in the original production of Tom Murphy’s booze-drenched, pub-set “Conversations on a Homecoming” consumed real alcohol throughout the course of this roughly ninety-minute real-time play. Judging by the volume of empty glasses littering the various tabletops in scenic designer Mike Mroch’s appropriately divey Irish pub set by the end of Strawdog Theatre Company’s current production, this would be quite an accomplishment.

Under the direction of Jonathan Berry, this able cast pulls off the slow build of intoxication that Murphy’s now-classic 1985 play, which finds a group of four young(ish) men meeting in a pub on the outskirts of Galway, Ireland in the mid-seventies to drink and celebrate the homecoming of one of their own, requires. And though the foursome does plenty of drinking, the celebrating is marred by a number of arguments that erupt over the course of the night.

Returning from a ten-year stint in America as a struggling actor, Michael (Adam Soule) finds that not everything is as he left it a decade before in his hometown or, more specifically (and perhaps more difficult to accept) in his beloved White House Pub. His compatriots, the outspoken Tom (Michael Dailey), the swaggering Liam (Ed Porter) and the constantly grinning (even when it’s forced) Junior (Jeff Duhigg) are more than happy to welcome him home, but not without driving home a certain understanding regarding the new status quo.

Under a consistently thick Irish brogue (dialect coach Adam Goldstein served his actors well), Murphy’s dialogue flows nicely here, with many an off-key ditty bursting forth as a sort of drunken punctuation. When the four bros are discussing their lives and describing the excitement (or lack thereof) in their hometown (“Malloy’s dog got killed by a tractor last month”) the show stays engaging, with a clear and steady tension resting just below the surface of the constant friendly banter. 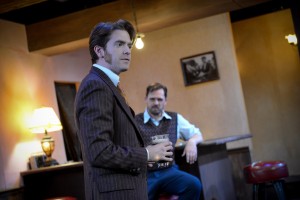 Unfortunately, once the dam bursts the arguments start to feel a bit circular and repetitive. This is partly due to the script (Murphy has a few points about hope and change that he’s looking to drive home) and partly due to the delivery (there’s a lot of one-note yelling—particularly from Dailey and Soule). As the show plays out in real-time (with characters ordering, drinking and walking to and from the offstage restroom) the realism here is key, so when things descend into a swirl of ideas and debate (not that drunken debates on ideals don’t take place in bars), some of the magic is lost. Still, even this last angry third of the show is mostly saved (or at least balanced) by the women in the production.

Tom’s girlfriend Peggy (played with plucky verve by Anita Deely) seeks to interject a sense of camaraderie while the motherly Missus (Janice O’Neill) comes in to deliver drinks and say something friendly every now and then. Most impressively, Elee Schrock, stepping in as a last-minute substitute for the young Anne on opening night, embodies the lost sense of hope and naivete that the men are each mourning in their own way.

A sense of secret blunted desperation permeates every exchange, even the liveliest moments of singing. Initially, Porter’s Liam struts carefully through the bar. A few drinks later he gesticulates and sputters wildly before ultimately coming to rest with his head in his hands. This sequence of actions follows the trajectory of the show: a slow and careful build followed by an eruption of debate and capped with a dangling sense of loss. And all those glasses left out at the end of it all. There’s no question of half-full or half-empty… they’re just all empty. (Zach Freeman)