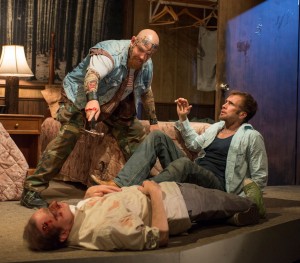 Most family dynamics are difficult; they’re even tougher when family members are flawed beyond redemption. Playwright Rhett Rossi explores the difficulty of forgiveness, capturing an exquisite balance of absurd humor and heartfelt pathos.

Pedophile Mitch (Larry Neumann, Jr.) has just been released from prison. Much to his surprise, he finds brother Roy (Darrell W. Cox) waiting for him. Roy makes it clear that all is not well between them; he assures Mitch that their reunion may not end happily. It’s a family-drama premise that could become mired in cliché; fortunately, Rossi skips trite truisms and fleshes out the characters, embracing their complete humanity.

Neumann brings the appropriate vulnerability to the role; his character has clearly paid his debt to society. Cox finds the right equilibrium between looming threat and a boy’s desperate need to have his big brother back in the family. Other standout performances include John Victor Allen as a loquacious member of the Aryan brotherhood who creates a major obstacle to the brothers’ reconciliation; Allen makes a very funny force of nature. Bruce Cronander captures the hard-as-nails “faux solid citizen” act of the average skinhead.

Occasionally, Rossi’s comedy veers toward the slapstick; disposing of a body should not be that funny. But the tragedy that both brothers have endured is well-defined and their yearning for a better life is clearly dramatized. And while the physical demands of the script tax Joe Jahraus’ staging and Shaun Renfro’s dingy set (front-row audience members got a lap full of topsoil), Jahraus’ direction manages to stay on top of the script’s numerous tone changes. The end result is a compelling picture of a family rebuilding its foundation from scratch. (Lisa Buscani)