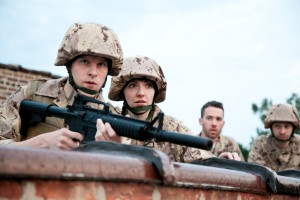 More than 16 million Americans served in World War II; in contrast, United States forces in Iraq numbered 112,000 in 2010 to 2011. While we may still be mired in conflict, we are not surrounded by the level of sacrifice that was necessary in the 1940s. As a result, the public is ignorant of the demands that the military places on the average soldier. Hannah Moscovitch successfully explores the physical and psychological cost for Canadian service personnel, and the lifelong wounds they suffer.

Finley’s naïve Jonny is greener than a Canadian May and Finley plays him dumb but endearing. Jones’ master corporal is surrounded by male attention and struggles with the inability to resist it. Fenderson and Stuckey are compelling; they radiate a palpable carnal desire. Moscovitch’s script feels repetitive in flashback, but illustrates its argument eloquently: we no longer know what it takes to defend our nation. (Lisa Buscani)