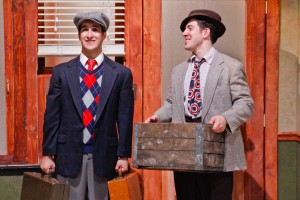 Say you’re a musical actor. And say your brother happens to be one as well. Say that both of you are actually really good at this whole musical acting thing. Now, suppose that you want to work together (you haven’t for a while). Suddenly, you stumble upon a little-known 2001 musical comedy written by another pair of acting brothers. “Hey!” you might say to your brother. “This just might be the ticket!”

But even formidable talents and a clear brotherly connection can’t shoulder the burden of the stream of stale jokes, mostly leaden songs and gimmicky plot device (two actors play almost a dozen characters) that “Double Trouble” (making its Chicago premiere with Porchlight Music Theatre) puts forth. Even the subtitle of the show—“A Musical Tour de Farce!”—is a groaner.

And it’s not for lack of trying. The two performers here—real-life brothers Adrian and Alexander Aguilar—throw themselves into this show with all the singing, dancing and hardcore mugging they can muster. And between the two of them they can muster quite a bit: Adrian was nominated for a 2012 Jeff Award for Best Lead Actor in a Musical for Porchlight’s “tick, tick, …BOOM!” and Alexander boasts a month-long run on Broadway, where he originated a role in “Lysistrata Jones.”

As a showcase for the fact that the Aguilar family has produced a pair of singing/dancing dynamos with solid comedic chops, “Double Trouble” works. After all, this show was written by Jim and Bob Walton to showcase their own similar talents (the Waltons also played the piano). But does “Double Trouble” work as a cohesive show? Not so much. 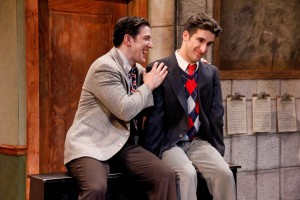 Here’s the breakdown: It’s 1940-something. Two singing/dancing brothers (Jimmy and Bobby Martin) have been flown from New York to Los Angeles to write a hit song for a demanding movie producer. They only have a few hours to make it happen. Oh, and there are lots of wacky characters roaming the studio halls making their task even harder.

From the moment the brothers enter Jeffrey D. Kmiec’s delightful 1940s throwback of a set (which is deceptively simple considering the quick changes and fast escapes the actors have to make), the pressure is on. A seemingly endless stream of tasks awaits them—from carting luggage to signing contracts to repeatedly brushing teeth—anything that will get one of the actors off the stage momentarily so he can transform into someone else (Alexia Rutherford’s array of costumes works wonders) and return to ham it up. All manner of tricks involving doubles, clever sound design (Jack Hawkins) and the previously mentioned escape hatches in the set are implemented to keep the gimmick going.

Director/Choreographer Matthew Crowle deftly handles this rapid-fire semblance of a plot, keeping the action flowing and the Aguilars dancing across the stage as their various characters. They each have a few good turns (Adrian as the fast-talking agent Swifty Morris, Alexander as the guileless secretary Millie Ferber) but at two hours (with a fifteen-minute intermission) the show’s too long by half. In other words, a normal amount of trouble would probably suffice. (Zach Freeman)