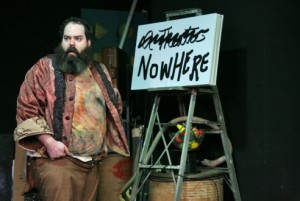 The Plagiarists current production of “King Ubu” is an updated version of “Ubu Roi,” Alfred Jarry’s revolutionary social satire and the godfather of all ensuing theaters of protest and marginalization (the various theaters of cruelty, absurdity, surrealism, existentialism, dadaism, et al). But this production raises two questions: how can we possibly capture the original, riot-inducing shock caused by “Ubu Roi’s” premiere? And is this even a desirable artistic goal?

In 1896, Jarry’s seminal play (all puns intended) took stabs at the French bourgeoisie with such relentless insult that after the play’s opening line of “Merdre” (“shit”) a riot broke out in the audience. Here in post-millennial, postmodern Chicago, The Plagiarists open their updated version with Ubu’s clumsy morning self-pleasuring. Shocking? Not really. Offensive? Possibly. Cringeworthy? A little. But riot producing? Definitely not.

In this age of media suffusion we are used to such banal transgressions and yet… “Ubu Roi” is still worth doing and redoing, if only to hold the cracked mirror of its original critique up to current audiences. Because in each era it’s worth considering what Jarry—through the infantile beastliness of Ubu and his merry band of anti-heroes—gleefully asserts: that people are stupid, greedy and selfish and that life and the pursuit of power is boring, nonsensical and meaningless within an ultimately indifferent universe.

Such sophomoric philosophizing might have seemed revolutionary in an era still hooked on Sarah Bernhardt, but in our postmodern world such notions are not only commonly accepted, but constantly reiterated and asserted through the greedy, selfishness and cruelty of reality television anti-heroes and their pervasive ilk.

Still, there is a reverse psychology at work here. We are meant to observe Ubu’s greedy and murderous transgressions with a mixture of revulsion and delight while silently reclaiming our own values. And so “King Ubu” attempts to update and in some ways re-imagine “Ubu Roi”‘s original cruelty by adding pornographic and sociopathic elements to the already intensely offensive and scatological script. 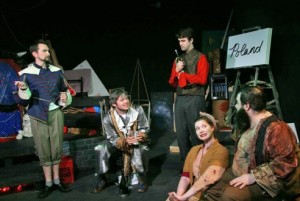 Furthermore, The Plagiarists reboot the original characters to more modernly offensive (or is that pleasing?) and clever appellations such as “Captain Shithead,” “Prince Booger,” “Ghost King Kielbasa,” “Duchess of South Hernia” and the “Earl of Boondocken.” They also add a deconstructionist frame to the play itself, questioning the value of attending the theater, while engaging the audience to assist in creating the ending. And, of course, they update the profanity, literally riddling the dialogue with indiscriminate blasts of the “f-word.”

“King Ubu” opens slowly with Mr. Ubu’s aforementioned morning ritual, and then proceeds apace with the primal and nihilistic proceedings of attacking all that we may have held sacred… in 1896. Yes, The Plagiarists are all on their game in this bombastic, absurd and oddly earnest re-imagining of the excesses of Ubu and yet the offensive and deeply trenchant social critique that is the centerpiece of the Ubu franchise is wholly missing here.

Still, I’m not sure it’s possible to replicate the menace, challenge and insult of the original Ubu script without including references to modern media culture and the information age. With this lacunae, this production forswears social impact in favor of theatrical exuberance: “King Ubu” attempts to grab us by the short and curlies yet only succeeds in tickling us under the chin. Which is not in itself wholly unpleasant. And there are certainly some enjoyable gems and theatrical moments here.

The talented company works well together and the show is a great vehicle for the wide range and quality of its many performers. And yet “King Ubu” wears us down with all its bombastic excesses, (Oh the shouting, the shouting! Must there always be such shouting?), rather than heightening our discomfort by shoving the mirror in our faces so that we are forced to protest such hideous revelations. The original “Ubu Roi,” so thoroughly over the top in the first place, becomes wholly ridiculous and cartoonish in the shrill, modern adaptation that is “King Ubu.”

And yet, somehow I still enjoyed myself. The multi-leveled set, a cross between a dump and a squatter’s house, is staged on a diagonal, and is the first clue to the rowdy and unconventional proceedings. The diagonal entrances and exits allow the actors to pick up speed and ambush the stage from either end and this in itself lends an unpredictable energy to the piece—at times the action becomes positively hysterical with all the running, shouting and war-mongering.

But watching the King of Poland and then his son Prince Booger being pursued by the sociopathic child-man Ubu, I found 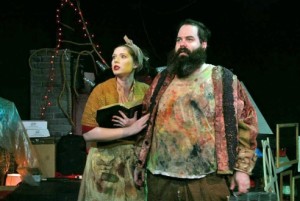 myself thinking of Hussein, Gaddafi, Assad and regime change on a global level. The truly offensive has nothing to do with a little bit of on-stage wanking and everything to do with the pornography of images that is the constancy of our twenty-four-hour news cycle. Or the hideously cruel things we do to each other as humans.

And maybe that’s what a true re-imagining of “Ubu Roi” needs to incorporate: the media images that for better or worse have become cultural memes in the twenty-first century. The O.J. Simpson chase, the deconstruction of Saddam Hussein’s statue, the egregious activities in Iraq and Afghanistan, the hideous public pursuit of Gaddafi and now, most terribly, the recent developments in Syria. Perhaps if theater wants to be topical, it’s got to embrace a symbiotic relationship with the twenty-first-century media culture. Other than that, it’s just an exercise in self-pleasuring. And that, I’m afraid, is something that we have seen all too often to be shocked by.

In some ways “King Ubu” succeeds to shock and forewarn, but in others it merely presents a cringeworthy version of an infant having a tantrum. And after all the sound and fury of this rambunctious production one hearkens back to Yeats’ uneasy response to the original “Ubu Roi” as he lamented “Now after us, the savage God…” Or as our parents used to say, “What is this world coming to?” According to the original “Ubu Roi” and now “King Ubu,” nothing super good. (Kaelyn Storme)