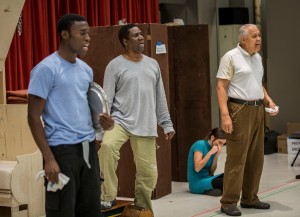 In the 1860s, George Pullman, a pioneering businessman, created a new position on trains that carried with it an embroiled dichotomy: the Pullman Porter. Pullman only hired African Americans, and while the job seemed lucrative, the porters were treated like second-class citizens by the passengers. They were servants, living in a transition between the slavery they left behind and the freedoms they would help secure through the Civil Rights movement.

Cheryl West’s “Pullman Porter Blues,” opening at the Goodman Theatre this month, is a passionate account of a family pulled between the security of a steady paycheck and basic human rights and the American Dream. Set in 1937, the play takes place while World War II is brewing, the Great Depression is waning and the luxury train business is at its peak.

“It’s in contention with his own father’s wills,” says Morohunfola. “His father wants him to elevate the race and get an education, become a doctor. Do something to bring more dignity to the role of the black man. Cephas himself doesn’t want all that pressure. So there’s a lot of conflict between seeking the approval of his father without having to bend to the will of his father.”

And the conflict extends beyond the scope of just this one family. The cast and crew of the Goodman production recently took a trip to the A. Philip Randolph Pullman Porter Museum in order to explore the history of the Pullman Porters and their importance to Chicago communities in an effort to reaffirm the ensemble’s work and possibly discover hidden details and elements of the show. 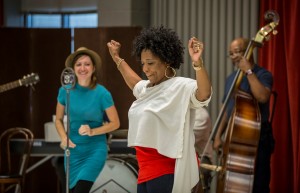 Located in the Pullman neighborhood on Chicago’s south side, the museum tells the story of the Pullman Porters from the perspective of the unions and workers. E. Faye Butler, who plays the blues singer Sister Juba, and has previously appeared in D.C. and Seattle productions of the play, illuminates the fact that the job was difficult and demeaning, but also a foothold toward achieving the American Dream.

According to the Porter Museum, the Pullman Porters served as a launching point for the labor and civil rights movement of the 1960s. The clandestine unionization of the porters was the beginning of a protest that would build throughout the twentieth century. One of the first men to start and organize the Montgomery bus boycott was a Pullman Porter.

All this turmoil and hope is expressed in the play by capturing this key time in the porters’ development into a unionized force.

“It’s high stakes,” says director Chuck Smith. “It’s right before the unionization. One of the characters, Sylvester, is a member of the union before it was ratified. The porters had to unionize in secret for fear of losing their pay, their jobs, or worse. The only way for the union to build momentum was to hold meetings unofficially, or George Pullman would dock pay, fire porters and hire scabs.” 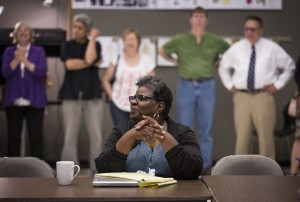 And it’s high stakes for the Goodman Theatre as well. With this production the Goodman hopes to educate and impart a sense of social justice to its audience.

“A lot of what we try to do at the Goodman is tell stories that don’t often get told, or that aren’t part of our cultural mindset. To shine light into corners of history that are normally in the dark,” says dramaturg Neena Arndt. “It’s easy to get a historical myopia about it, but it was one-hundred years of a very complex time for African Americans to be in America, and I think that’s what this play and museum represents well.”

“In Chicago, the blues and Pullman go hand-in-hand. Pullman Porters were the town criers of the African-American community, spreading news all over the country. They were treated with respect by everyone in the black community,” says Smith. “Cheryl pairs a rich and sometimes tragic story with blues music, which is arguably as legendary as the Pullman Porters themselves.”