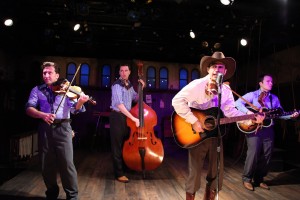 In 1979, Hank Williams Jr. released the song “Family Tradition” in which he demands of the listener: “Stop and think it over / put yourself in my position. If I get stoned and sing all night long / it’s a family tradition.” At first glance, those lyrics might sound a bit trivial—something any country musician could throw into a catchy song—but once you know the story of his hard-living father, eloquently rendered by playwrights Randal Myler and Mark Harelik in “Hank Williams: Lost Highway” and captivatingly produced by American Blues Theater, it’s clear that that’s a serious bit of songwriting.

Before country music “turned into a pickup commercial” (a fine example of the clever dialogue here by Myler and Harelik) there was Hank Williams (born Hiram King Williams). Considered the father of contemporary country music and one of the most influential country musicians of all time (and perhaps one of the most influential musicians period), Williams penned dozens of popular singles, sold out concerts and was a frequenter of the illustrious Grand Ole Opry. He was also dead at the age of twenty-nine.

The Hank Williams in “Lost Highway” is not just a country music legend. Sure, there’s some lionizing going on here, but the Williams that this foot-stomping musical biography presents (and that ensemble member Matthew Brumlow captures with uncanny skill) is talented and tormented in equal measure. Opening with his untimely death before backtracking to trace his childhood, rise to fame and ultimate deterioration, the show is peppered with more than twenty musical numbers from Williams’ extensive canon. 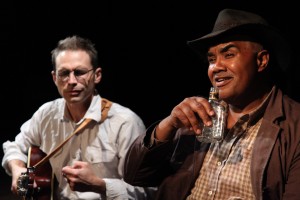 Along the way, the audience is offered a glimpse into the troubled mind of one of the most well-known musicians of all time. From early scenes singing in church with his domineering mother (Suzanne Petri) to brief mentoring sessions with street musician Tee Tot (John Crowley, boasting soul-stirring vocals) to his first rehearsals and performances with his band, The Drifting Cowboys (consisting of impressively talented actor/musicians Austin Cook, Michael Mahler, Greg Hirte and John Foley) a new song is incorporated every few minutes.

Musical Director Malcolm Ruhl uses songs both to further plot points (as when “Move it on Over” and “Mind Your Own Business” are directed by Hank and his band toward manager/producer Fred Rose (James Leaming) when he suggests changes to songs) and to demonstrate Hank’s state of mind (the aggressively jaunty “Hey, Good Lookin” toward the end of the show is chilling in regards to Hank’s descension into alcoholism and substance abuse). And when the band performs “I’m Gonna Sing, Sing, Sing” with Hank’s wife Audrey (a charming Laura Coover), relationship dynamics are put on full display.

In fact, the singing and instrumentation is so good that “Lost Highway” often feels like a bona fide tribute concert incorporating historical turning points of Williams’ life.

To facilitate the varied locations of the action, scenic designers Jackie and Rick Penrod have created a broad wooden set littered with trinkets and musical instruments that somehow manages to incorporate aspects of prestigious performance venues, questionably safe dive bars and backwoods Baptist churches. Off to one side is the makings of a small diner where a waitress (the enthralling Dana Black) sits, giving us insight into the point of view of the average Williams fan. 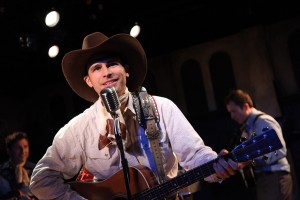 Director Damon Kiely has a dynamite cast on his hands and he pulls pitch-perfect performances from all of them. Characters move in and out of the space, revolving around Brumlow’s Hank, the center of so many people’s universes even in his most troubled times. It may not be all historically accurate—Audrey is portrayed as something of a talentless 1940s gold digger and the Drifting Cowboys are condensed into one consistent group of guys instead of the ever-shifting backing band they were—but the spirit of Hank Williams is done proud here.

Many of Williams’ bluesy lyrics are given new meaning in the context of his life (or at least the life that’s presented here). “I’m a rollin’ stone all alone and lost / For a life of sin I have paid the cost” he laments in “Lost Highway” (also the title of the show). By the end of this production it’s clear that those are not merely song lyrics but the public confessions of an American legend. (Zach Freeman)