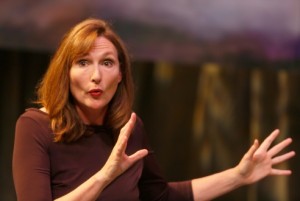 “I love Hollywood. Of course I do…” declares Nora Dunn’s opening character, a gregarious eighty-seven-year-old Hollywood type discussing her behind-the-scenes involvement in the creation of a number of stars from the 1950s. Later Dunn, as herself (or at least a performance version of herself), makes a similar, though tellingly modified, statement: “I love the Hollywood myth.”

The difference between the myth of Hollywood and the reality of Hollywood is the ostensible focal point of this quietly comedic and surprisingly poignant one-woman show, written and performed by Dunn (a “Saturday Night Live” alum with an impressive number of film and television credits under her belt). The true focal point is much harder to nail down.

Whether Dunn is recounting her experiences growing up in a large, middle-class Irish Catholic family on Chicago’s West Side (constantly relocating) or portraying a seemingly naive child pointing out the troubling facade of “Mr. Rogers’ Neighborhood” (he doesn’t seem to have any actual neighbors aside from his own miniature creations), Dunn offers a fairly cynical view of show business and humanity in general. The trick here is that her individual monologues are so subtly rendered that pessimism is often presented as hopefulness in the mouths of her varied personas.

And Dunn is a charming performer, consistently captivating in whatever character she chooses to inhabit. But the ultimate takeaway from this entertaining seventy-minute performance is a tough nut to crack. Dunn tells us she’s grown disillusioned with the entertainment industry (and gives us plenty of backstage stories to account for this feeling) but she’s also chosen to mount a one-woman show to give us this news. In short, it’s a good line, but perhaps not completely convincing.

Still, it’s a pleasure to watch anyone perform with the level of talent and composure that Dunn possesses. And there’s something intriguing about the lack of a clear conclusion to be drawn. If Dunn is sticking it to Hollywood here, she’s doing it like someone who’s jaded enough to know how to get away with it: by doing it quietly and carefully. (Zach Freeman)