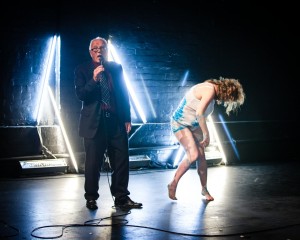 “Sweet Child of Mine” is a short, entertaining theatrical piece by Bron Batten and her parents Jim and Linda Batten. It mixes the boundaries of live performance, “home videos,” stand-up, as well as a smattering of song and dance, without any traditional fourth wall. There is absurdism galore. In one captivating scene, Batten reprises one of her many childhood “animal” theater roles: she puts an audience member on a long-distance phone call to Australia to role-play a monologue; all the while Batten stares at him, drinking her native Foster’s beer underneath an animal mask.

This is the first US performance of this award-winning Australian play and Batten is loaded with talent, absurdly comfortable on stage, and despite her deceptive ease (there is a hidden structure to the most informal of her audience participation points), she delivers a highly complex performance. And while the presence of her father on stage offers a measure of comfort at first (he is a huggable, good-willed type), things lose some steam with his choppy transitions and hammy jokes.

The show begins with a home video of her elderly parents, Jim and Linda Batten, sitting on a couch as Bron peppers them with questions about herself and her art. “Can you tell me what I do for a living?” she asks her parents (she is off screen and off stage). Quickly her mother offers up, “I’m confused,” and later avers, “Your income is unreliable.” In a breath, the parents have become a large part of the performance. Bron, moving about in her undergarments (she offers a quick aside about pubic hair—her “garden”), finishes a dance piece and throws the real premise at the audience: she talks about her degrees in theater and dance, the useless nature of art—lamenting with a formal, didactic voice about postmodernism—and quickly turns the stage back to the video where her parents create a list of how success in art can be achieved.

According to her parents, art has to be “beautiful” and “uplifting,” with good “diction” and “no nudity” or “bad language.” Art must be “entertaining.” Some of these rules Bron obeys; others not so much. The tongue-in-check tone is constantly tested. There is “higher” art as part of the show in stark violation of her parents’ rules; but even at that she looks up and asks the audience if they were troubled by the previous display. Bron walks a perilous line in her interaction with the audience. At one point there was a small word said from the seats and Brom quickly tore into the audience with a glance. Nevertheless, that is where the good tension and the mouse trap of her creation truly come into play.

“Sweet Child of Mine” is an intriguing play, featuring a gifted actor at its center. She is easy to believe, fun to watch, yet a little dangerous. And while the father was slightly off on this opening night, there is plenty of room for growth and for a stronger ending narrative. Batten has produced something both fun and engaging. (Mark Eleveld)