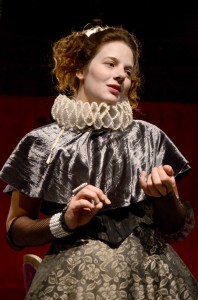 “The Balcony” opens in an upscale whorehouse where clients act out absurd and sometimes violent power fantasies (a Judge, a Bishop, a General) as outside a real revolution rages in the streets. The endlessly mirrored milieu of misplaced narcissism and play-acting while the real world collapses has easy contemporary resonances; it also makes for grim appraisals of the human condition typical of playwright Jean Genet (who himself was an itinerant prostitute and petty criminal for much of his life).

But the play quickly gets darker, turning from psychoanalytic burlesque to harsh political satire as the role players find themselves posing as the real figures of authority they fetishize in a counter-revolutionary effort to establish order after the real Judges, Bishops and Generals are killed. The Madame Irma (a powerhouse but frantic Nicole Wiesner) even uses her costumes to appear as the queen. The line, of course, between real and illusory authority is a thin but bright one, and nothing ends well here. “The Balcony” provides some intoxicating illustrations of the power of the simulacra and the irrational hopes we have for revolution. Unfortunately, plot threads are loose and sometimes bewildering, and the play ends almost incoherently.

Trap Door’s production does beautifully for the most part in negotiating the unevenness of the writing, with much-needed comic relief during sexually explicit scenes (particularly Simina Contras as an endlessly put-upon prostitute and David Steiger as the bumptious would-be Judge). Director Max Truax chooses not to truncate the final bloody, Artaudian scenes, which more or less fall flat, but his real triumph is in humanizing sometimes very thinly written parts and bringing a heart to Genet’s nihilism. (Monica Westin)