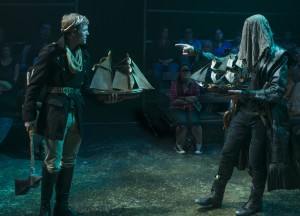 As they’ve opted to open with a brief narrative recap (“Once upon a time, all the folk were free…”), it’s clear that writers Nathan Allen and Chris Mathews are well aware that even the most focused of memories may need a little refreshing before audiences are ready to dive into this sequel to last year’s “The Iron Stag King: Part One.” And they’re right about that; there’s a good deal of backstory that potential viewers should be acquainted with (whether they saw the first installment of this as-yet-unnamed trilogy or not). Because as with part one, “The Crownless King” throws it all out there: Marriage. War. Free will. The disembodied voice of Tracy Letts. It’s a lot to take in.

After the triumphant hammer-raising at the end of “Iron Stag King,” the newly crowned Casper Kent (Brandon Ruiter) is tasked with leading the kingdom of New Plymouth toward… something. It’s never quite clear what. It seems Casper mainly just wants to preside over a peaceful, prosperous land. But shifty storyteller Hap the Golden (Cliff Chamberlain)—who’s coordinated all the steps up to this point—has another, more violent, plan in mind. And whatever anyone’s plan is, the fierce pirate Davy Boone (Blake Montgomery doing a fairly solid impression of Daniel Day-Lewis’ Bill the Butcher from “Gangs of New York”) objects and declares war on New Plymouth in the name of freedom.

So now Casper, newly married to fellow warrior Rienne (Paige Collins) in a wedding that takes place early on in act one, must find a solution to the imminent threat of pirates on his shores, while also seeking a way to reunite with his ephemeral dream girl (a doe-eyed Kay Kron) and gain control of his “story” from both Hap and the shadowy Irek Obsidian (Letts). Talk about narrative complications. 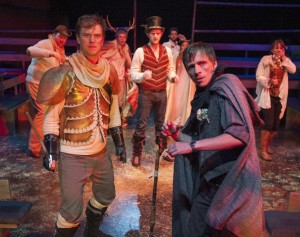 Once again the puppetry (Rachel Watson) is captivating, as foxes, birds and a monstrous dragon make their way in, through and around Collette Pollard’s minimal arena-like stage. Similarly, Melissa Torchia’s costumes—a mix of high fantasy and blue jeans—tell us as much about the world we’ve been thrust into as the dialogue.

In the first act Allen and Mathews push the story along at a breakneck pace, and Allen (pulling double-duty as director) moves his actors around the stage just about as quickly as we can follow them (and sometimes too quickly), with ensemble members Kara Davidson, Patrick Falcon and Ben Hertel constantly shifting from character to character. With such a minimal set to work with, it’s sometimes difficult to remember exactly where a given scene is taking place, much less place the action in a workable large-scale framework, which is a problem for this production—and a bigger problem for the trilogy as a whole. The act ends with what’s meant to be a mighty naval battle, but two actors holding model ships is not exhilarating simulation.

But somewhere during the early minutes of the second act of this convoluted tapestry of story-telling, my brain made a quick switchover from the elaborate and deeply thought-out world of Tolkien to the more tongue-in-cheek, self-aware world of Marvel (or at least the Marvel movie universe). Through this lens, the sometimes stilted dialogue and occasional oddly placed one-liners make more sense. When a character that has thus far only been alluded to makes an unexpected appearance reaching out an arm to rescue one of our protagonists, another character quips: “I know it’s a stretch…” And it is. 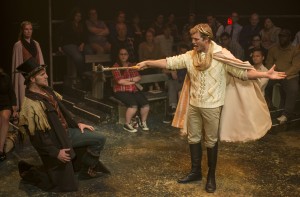 But this whole production is a stretch. This whole concept is a stretch. Creating a fantasy world on stage that attempts to interweave American folklore with Middle Earth and pirates is a stretch. Asking audiences to witness a trilogy of shows one year at a time for three years is a stretch. But it’s a fun, ambitious stretch. And maybe it doesn’t all work as well as it could; the story could be tighter and the action could be bigger. Sure, the creators have gotten a little too self-indulgent here and there (for all the fast-paced movement, it doesn’t feel like 140 minutes of plot has been revealed).

“The Crownless King” impresses in bits and pieces: when the dragon Irek Obsidian makes an appearance in all his scaly goodness, when a pirate covers a chess board with black pawns to prove a point and nearly every time the delightfully deadpan, Johnny Depp-like John Henry Roberts tosses out a snappy line of dialogue. In the end, it may not be completely cohesive, but it’s certainly fun. (Zach Freeman)