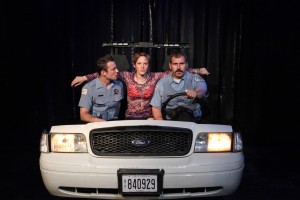 Hero cops Alex (Nick Mikula) and Hal (Mark Pracht) face investigation over rape charges filed by Hope (Kate Black-Spence). Barbara Lhota’s script careens back and forth between the two cops’ versions of the night’s events and unstable Hope’s side of the story. Unfortunately, implausibility hampers the narrative and keeps the piece from reaching its potential.

The scenarios are chock-a-block with improbability. In one tale, Hope blackmails the cops with a damaging phone vid for a ride home. What’s to stop the large, muscular officers from grabbing the slender, drunk woman’s phone and smashing it into a million pieces? Investigating detectives Jules Rossi (Lisa Herceg) and Kim Simon (Victoria Caciopoli) discover Hope has previously sued another department for sexual impropriety. Why would the investigators take the charges seriously? Finally, notoriously reticent Chicago police officers trip over themselves to betray each other; they don’t call it “the Blue Wall” for nothing. Lhota’s ear for dialogue is sharp and the characters are well-drawn, but the investigators’ expository summaries are repetitious and overgrown. While she successfully makes her argument about the subjectivity of “truth” and its bruising impact, the piece’s plot points are problematic.

Director Jason A. Fleece’s staging makes the story shifts crystal clear; his use of Stephen H. Carmody’s functional set keeps the story fabric from unraveling. Mikula and Pracht effectively capture the asshole/angel aspects of their characters, switching from one detailed portrayal to another. Black-Spence is appropriately fragile and outraged.  Herceg and Caciopoli provide believable voices of reason and Max Ganet offers necessary comic relief as the geeky next-door neighbor. The ensemble competently supports a story, or many stories, that don’t hold up. (Lisa Buscani)